Pope Francis’ Book for Young People: “Ask: My Answers to Your Questions” 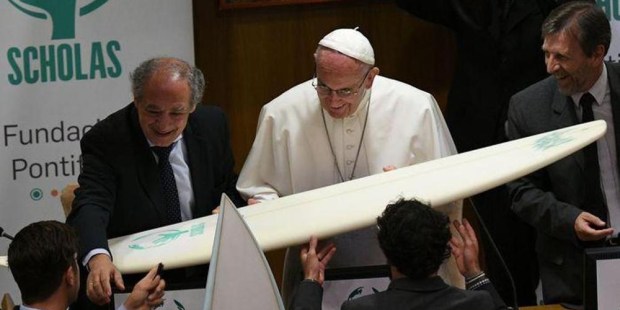 At meeting attended by George Clooney and Richard Gere, a new educational outreach was announced

During the meeting between Pope Francis and Scholas Occurrentes — an International Organization of Pontifical Right created by Pope Francis that educates young people in order to promote social integration and a culture of encounter for peace — held yesterday in the Synod Hall in Rome, a new Mondadori publishing project featuring the pope was presented. Produced in collaboration with Scholas Occurrentes and the start-up social media site eFanswer and aimed at teens and young adults, Ask: My Answers to Your Questions will be published later this year in Italy and abroad.

Ask: My Answers to Your Questions is not just a book but also an international social media event. Pope Francis is in fact encouraging young people from all over the world to ask him questions through the site http://www.askpopefrancis.scholasoccurrentes.org, available in five languages: Italian, English, French, Spanish and Portuguese. Any and all questions are welcome, and there are no predetermined topics or themes; the important thing is that the questions asked come from the heart. The questions will be collected and selected by Mondadori and Scholas Occurrentes on the basis of two main criteria, variety and originality, so as to allow Pope Francis to share his thoughts on topics that have not been discussed thus far. The Holy Father’s answers will be published in this book that will be released in the coming months and for which the rights will be sold worldwide. Serving as editor will be Tiziana Lupi, a journalist. Lupi is already an author for Mondadori with Our Pope, an illustrated biography of Pope Francis released in 2014, and editor of last year’s My Idea of Art, also from Mondadori, in which Pope Francis for the first time shared his thoughts on art.

As a true social media project, Ask: My Answers to Your Questions uses new forms of communication to put the Holy Father in touch with people from every corner of the planet. The book will be the result of, and the inspiration for, a large virtual dialogue between Pope Francis and young people around the world, from any social class and religion who, thanks to the internet, can ask their questions just as if they were face-to-face with him.

During the Scholas Occurrentes meeting Pope Francis stressed the importance of learning to engage in dialogue. Because in a dialogue, everybody wins and nobody loses. Because to dialogue means to build bridges. Tiziana Lupi, who will edit the new book, picked up on this emphasis in presenting the project. “With this book, along with Scholas Occurrentes and Mondadori, we are really trying to open a door to this dialogue,” Lupi said. “Unfiltered, because the youth can ask their questions directly through the web platform. The intent is really to be open to listening and to dialogue: two key instruments, as supported by Pope Francis, to create a different world.” The first two questions were asked by two of 12 Youtubers who were present at the meeting. The answers, which the Holy Father gave immediately, will be the first to be put in the book.

At the conclusion of the conference, actors George Clooney, Richard Gere, and Salma Hayek were awarded the organization’s Olivari, or Peace Olive Tree Medal, before Pope Francis and more than 400 conference participants. Clooney, who had his wife Amal beside him, commented: “It was a wonderful experience and it is a wonderful program that Scholas Occurrentes is pursuing, causing so many different religions to speak of inclusion, because we know that hatred and fundamentalist attitudes are learned and are inculcated.” At the end of the program Pope Francis, in the atrium of the Paul VI Hall, conversed for several minutes with Richard Gere.

Among the topics addressed in the three days of the Scholas Occurentes conference were environmental issues, dear to both Clooney and Gere. Also among the audience during the last day of the conference was the former Italian Minister of Education, Luigi Berlinguer, who spoke about the role of beauty and art in education, criticizing the Italian approach, he said, which often favors logic over feelings and education regarding beauty.