Why Are Medieval Manuscripts Filled with Raging, Armed Rabbits? 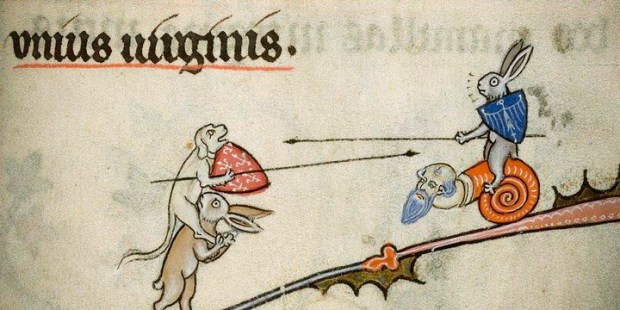 These are not your classic Easter bunnies.

Imagine the life of a medieval copyist. A scribe, that is. You would have to transcribe an entire volume, whether you liked that particular book or not, on a daily basis, word by word, with your pen and ink and vellum. No Microsoft Word, no “delete” key, no electric light, no “save,” no “copy + paste” functions. And then, once you’re done with that one, start over. Again. With another book.

Oh, and, please, do not forget to illuminate it with beautiful capital letters and decoration on the margins.

Of course you would find some scribes willing to fill those margins with crude scenes, often violent, or grotesque. As Cory Doctorow wrote in his piece on BoingBoing, “The margins of medieval manuscripts were a playground for bored monks with crude senses of humor.”

And one of their favorite motifs to express such moods was, yes, the murderous bunny, just like the one in Monty Python’s Holy Grail movie.

Knight-like armed, violent rabbits were often depicted in marginal decorations killing dogs, humans or jousting against other creatures. But what’s the symbolism behind them?

Jon Kaneko-James, as cited by Cory Doctorow, explains it:

“Since rabbits and hares were signs of cowardice, innocence, helplessness, and passive but willing sexuality (lots of medieval sexual imagery involves wolves jumping on rabbits), the idea of them getting their revenge amused medieval artists as much as it amuses me. All told, they are pretty helpless animals whose only hope of survival is to breed fast and run away, a trait that wasn’t particularly successful in the Medieval era – a significant proportion of the French economy was based on eating and skinning rabbits.

“The image of the rabbit’s revenge transcends just the illuminated manuscript – the misericord seats in Manchester Cathedral are supported by a 15th-century carving of a hunter being spit-roasted by rabbits while his dogs are boiled in the pot.

“In medieval manuscripts the image of the rabbit’s revenge is often used to show the cowardice or stupidity of the person illustrated. We see this in the Middle English nickname Stickhare, a name for cowards, and if the we take a look at the Poke list, we’ll see a lot of tough hunters cowering in the face of rabbits with big sticks. In the 13th-century epic Roman de Renart we even have the character Coward, who is a hare, capturing an armed man who drops his sword at the sight of him and ends up being dangled from a stick.”