What Is It About Confession That Bugs Non-Catholics? 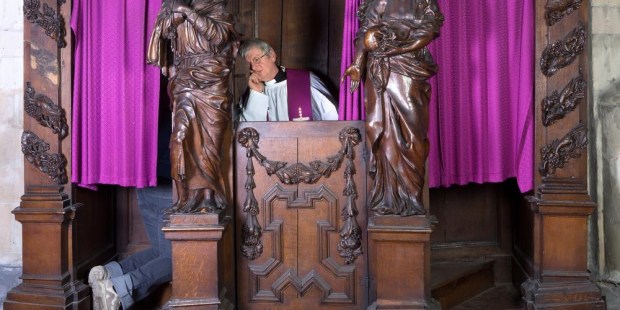 If your friends give you a hard time for confessing to a priest, they might just be afraid … or curious

Her Evangelical friend kept picking at her about confession, a reader wrote me. This friend, who must have been very annoying, demanded to know how she could tell some man about her sins and why she thought that he could do anything about them.

I have had this same experience, and many of you probably have as well. Some of our Evangelical brethren can get weirdly upset by the idea of confession. People you know, sometimes close relatives or very good friends, seem personally offended by something that as a Catholic you do as a matter of course. It’s a little weird, as if they must repeatedly question the way you raise your children, when your children seem to be turning out well.

Very often, nothing you can say seems to make any difference. The kindest, clearest, most compelling explanation goes in one ear and out the other. Eventually you will hear the same remarks, maybe in almost exactly the same words, with the same annoyance, astonishment, or insistence in their voices.

Confession is one of the main subjects of their annoyance, but I have had friends equally insulted by my belief in the presence of Our Lord in the elements at Mass and my confidence in the authority of the Church’s Magisterium, and especially by my believing that the pope was not just a man like any other.

But why? It’s no skin off their nose if I go into a small room late on a Saturday morning and tell a man authorized for this kind of work what I’ve done wrong and get his response. They wouldn’t say anything if I went to a counselor every week and told him the same things. So why do they care so much that I go to a priest in the hope of fixing my relationship with God and becoming a better man? I mean, really? What’s it to them?

I’m tempted to respond rudely, because they’re just being rude themselves. But responding in kind gets you nowhere. Some people will take your reaction as defensiveness and think they’ve got you.

Asking your inquisitor “Why do you care?” with concern and not annoyance is the right answer to someone who keeps pestering you about the way you practice your faith. It is a way of expressing your care for him and at the same time may be the best way to make him stop annoying you.

He may have a reason why he cares, or thinks he cares. It may not be a good reason, and it may be a rationalization, but you now have a chance to answer it. The answer should stop him bothering you and may even let you talk with him in a fruitful way.

Or he may have a reason he doesn’t recognize himself, and you will be doing him a kindness by making him reflect on why he reacts to your faith the way he does. Sometimes — and this I’ve seen myself — the idea of saying his sins aloud and with another person listening really frightens him. He doesn’t want to hear them said out loud, even by himself. And that’s perfectly understandable.

But not a reason for pestering you for going to confession.

If he sees that he’s reacting to you from a fear or dislike of what you’re doing, you can begin to show him that in confession (or in any other Catholic practice to which he objects), the loving Father offers his children what they really need and what they really want. You can help him see that these things express and make powerfully present the gospel he believes in. And you may be able to turn a persecutor into a friend, or a friend into a better friend.