Photo Gallery: Eschewing a splashy event, the sisters chose to be “on the street, out with the people”, offering both sacraments and snacks

Under the soaring roof of St. Patrick’s Cathedral in New York City, Cardinal Timothy Dolan praised the “fresh and young religious institute” of the Sisters of Life in a Mass of Thanksgiving for the order’s 25th anniversary on June 1. And the cardinal also passed on a message from the Dominicans, who just celebrated their 800th anniversary: “Tell those kids congratulations!”

Since their founding by Cardinal John O’Connor in 1991, the Sisters of Life have grown from eight members to nearly a hundred. In addition to numerous convents and retreat centers in the greater New York area, the Sisters have also expanded to other locations in the western United States and abroad to Canada.

Going above and beyond the three traditional vows of poverty, chastity, and obedience, the Sisters of Life take a fourth vow: to protect and embrace the sacredness of human life. The sisters assist women in crisis pregnancies by inviting them to live with the community in their convents, and they also provide healing retreats for those suffering from post-abortion grief. In the past 25 years, they have witnessed many “miracles of courage and love, miracles of healing,” said Mother Agnes Mary Donovan, the superior general of the order, in her remarks at the end of the anniversary Mass.

The Mass attracted men, women, and children of all ages. Rather appropriately, the noise of babies echoed throughout the 90-minute liturgy. The presence of at least nine red or scarlet skull caps indicated attendance by “more … bishops than a Notre Dame football game,” joked Cardinal Dolan.

Five of the Sisters of Life from the mission in Toronto, Canada, drove down for the event. A whole block of pews was filled by the Sisters of Life in their dark blue and white habits, and men and women from many other orders mingled throughout the congregation, including the Franciscan Friars of the Renewal in their distinctive gray, hooded habits.

One man, who had attended the Mass for the institution of the order 25 years ago in St. Patrick’s Cathedral, was here again for their 25th anniversary. “I can’t believe how fast the time has gone!” he exclaimed.

The Mass was accompanied by exquisite music, thanks to the choir of the Sisters of Life, joined by several guest singers including men, women, and children. They sang Franz Schubert’s German Mass and several pieces of a cappella polyphony by master composers Tomas Luis de Victoria and Ludovico de Viadana.

At the end of Mass, Cardinal Dolan invited everyone to a four-hour block party on 51st Street between Ninth and Tenth Avenues, near the Sisters’ Sacred Heart of Jesus Convent. The generosity of sponsors let the sisters provide free boxed lunches, pizza, hotdogs, popcorn, ice cream, and drinks. “Feeding people is important to us,” commented one of the sisters, saying they were all “secretly Italian grandmothers.” She added, “You’ll never leave one of our events hungry.”

Vicar General Sr. Mary Elizabeth described the block party as “an occasion to celebrate what God has done over these 25 years” and a thank-you to all the co-workers and volunteers who helped “to provide for the pregnant women we serve.” The sisters didn’t want to have the event in a hotel, she added, since they would rather be “on the street, out with the people.”

There were lots of fun kids’ activities with a unique apostolic bent. Children were encouraged to write love notes to Mary and tack them onto a large bulletin board or to pose for a picture of a mock holy card as an incentive to become the saint they were meant to be.

In the nearby Sacred Heart of Jesus Church, the Blessed Sacrament was exposed for adoration behind banks of shimmering candles while long lines of people waited for confession. The block party ended with outdoor Eucharistic procession and benediction.

When asked how they met the Sisters, most people at the block party responded with variations on “I’ve always known” and “always loved” them — hardly surprising, since the Sisters have become a well-entrenched fixture of Catholic life in New York City.

Cardinal Dolan even boldly invited everyone to the 50th anniversary of the Sisters of Life — to be held, he said, at Yankee Stadium “jam packed with hundreds” of Sisters of Life and the women and children helped by them. 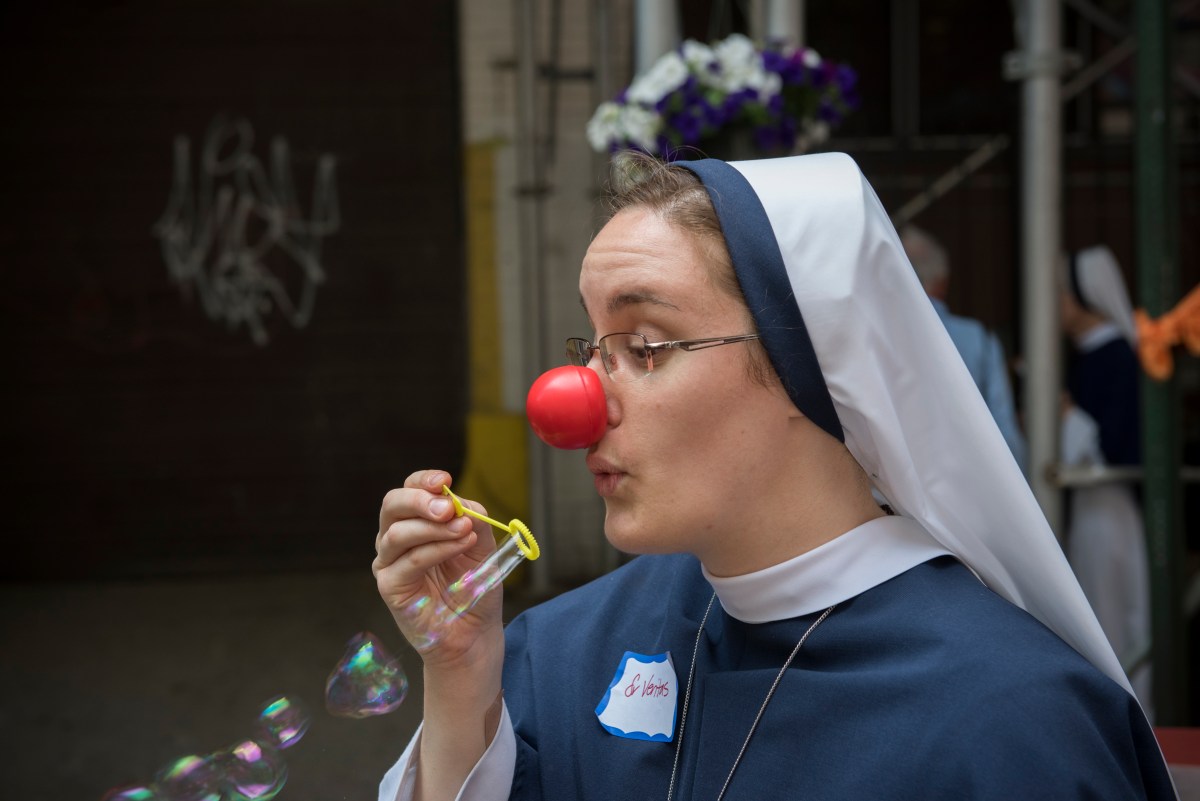