At the end of Mass, Cardinal Dolan invited everyone to a four-hour block party on 51st Street between Ninth and Tenth Avenues, near the Sisters’ Sacred Heart of Jesus Convent. The generosity of sponsors let the sisters provide free boxed lunches, pizza, hotdogs, popcorn, ice cream, and drinks. “Feeding people is important to us,” commented one of the sisters, saying they were all “secretly Italian grandmothers.” She added, “You’ll never leave one of our events hungry.”

Vicar General Sr. Mary Elizabeth described the block party as “an occasion to celebrate what God has done over these 25 years” and a thank-you to all the co-workers and volunteers who helped “to provide for the pregnant women we serve.” The sisters didn’t want to have the event in a hotel, she added, since they would rather be “on the street, out with the people.”

There were lots of fun kids’ activities with a unique apostolic bent. Children were encouraged to write love notes to Mary and tack them onto a large bulletin board or to pose for a picture of a mock holy card as an incentive to become the saint they were meant to be.

In the nearby Sacred Heart of Jesus Church, the Blessed Sacrament was exposed for adoration behind banks of shimmering candles while long lines of people waited for confession. The block party ended with outdoor Eucharistic procession and benediction.

When asked how they met the Sisters, most people at the block party responded with variations on “I’ve always known” and “always loved” them — hardly surprising, since the Sisters have become a well-entrenched fixture of Catholic life in New York City.

Cardinal Dolan even boldly invited everyone to the 50th anniversary of the Sisters of Life — to be held, he said, at Yankee Stadium “jam packed with hundreds” of Sisters of Life and the women and children helped by them. 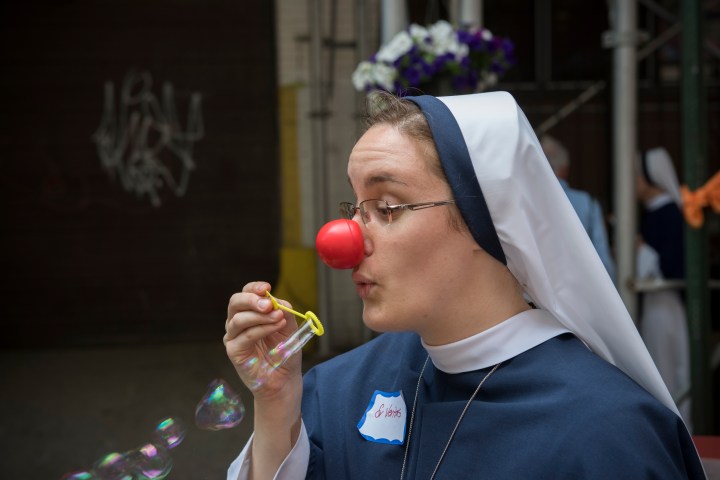