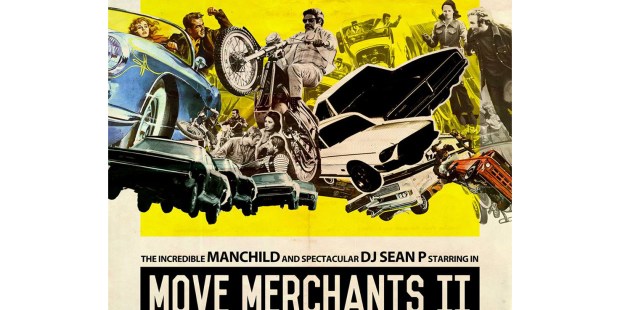 “This is what hip hop moved by God needs”

The fatal flaw of most spiritually-minded hip hop – not all, but most – is the same that afflicts most “religious” music of all stripes: it’s not of the world, but not in it either. Flannery O’Connor said it best: bad religious art just rearranges a pre-set vision from the Church or the Bible into different patterns. It never gets to the real business of art, which is penetrating reality with all its dynamism and strangeness.

Move Merchants II, a (free) follow-up to the debut album from lyricist Manchild and DJ Sean P, opens with a very clear statement: this isn’t that kind of album.

“Penetrate the chemical breakdown and give it to ears that are listening, lives that are living,” Manchild raps in the hard-as-concrete opener, “Peddle Push.” DJ Sean P’s haunting sample and neck-rocking drums à la the late great J Dilla lead to a chorus that teaches, but in a very raw, human way: “If you’re not moving my people, you’re losing. If we can’t change it, tell me who then?”

From the get-go, this phatmass production is a work of pure dynamism – and hilarious strangeness. A playful 70s action flick theme reminiscent of early De La Soul sets the backdrop, complete with a grainy movie trailer (“Hide yo mothers,” a trailer voice warns. “Here comes the Move Merchants”) and a very un-serious website with a few film credits (e.g., “Screenplay by Your Mom”) and a brief synopsis about crocheted karate belts.

DJ Sean P’s beats are fueled by chopped funk and soul of that period, but there’s no mistaking the kind of sound Move Merchants know and love. Tracks like “Quitting Is for Quitters” and “Case May Be” are rooted in golden era boom bap with its cracking snares, a cappella scratches, and word play.

But like all great MCs from the mid-90s, Manchild doesn’t want to steal the show or be too overt. Instead, he sets a mood, paints a picture, and pumps the positivity – albeit with a shot or two of braggadocio along the way, just for fun. “Homily to homonym, I’m humble but I want to win,” Manchild raps on the “Talking to Strangers.” “Fall onto the pavement if you wore the shoes I’m walking in.”

Later in that same verse, the MC delivers a powerful line that’s easy to miss the first go-round: “Nevermore the raven, death-defying dervishes, I keep divine flesh inside me as my nourishment.” In another track, “Sure As Can Be,” Manchild again gestures to the divine: “The final act I’m certain that freedom will still prevail, but my actions swing the hammer for Jesus to feel the nails.”

But even when the spiritual element moves front and center, as on the orchestral, life-affirming “Coming Out Swinging” and the southern-inspired “Devil Is a Lie,” it never feels false – or forced. It doesn’t compete with or retreat from the muck and mire of reality. Instead, it’s a kind of firmament that naturally encloses and informs the duo’s musical tour of their world.

This is what hip hop moved by God needs, because it’s what music itself needs: not a bland, predictable rearrangement of formulas, but an honest dive into the tangles and wonders of human life, in and through the mysterious source shining through all things.