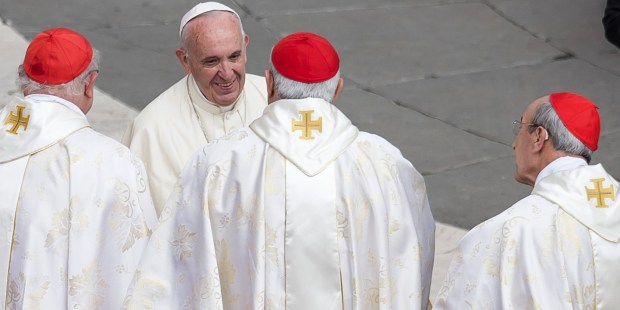 “The heart of the priest is a heart pierced by the love of the Lord,” the Holy Father told clergy.

VATICAN CITY — Pope Francis on Friday morning, the Feast of the Sacred Heart of Jesus, celebrated the Jubilee for Priests, inviting clergy to reflect on two hearts: “the Heart of the Good Shepherd, and our own heart as priests.”

In his homily during Holy Mass, the pope told thousands of priests from every continent, gathered in St. Peter’s Square: “The Heart of the Good Shepherd is not only the Heart that shows us mercy, but is itself mercy,” he said. “There the Father’s love shines forth; there I know I am welcomed and understood as I am; there, with all my sins and limitations, I know the certainty that I am chosen and loved,” he told priests.

“Contemplating that heart, I renew my first love: the memory of that time when the Lord touched my soul and called me to follow him, the memory of the joy of having cast the nets of our life upon the sea of his word (cf. Lk 5:5),” he said.

The Holy Father explained that “the great riches of the Heart of Jesus are two: the Father and ourselves. His days were divided between prayer to the Father and encountering people. So too the heart of Christ’s priests knows only two directions: the Lord and his people.”

“The heart of the priest is a heart pierced by the love of the Lord,” he said. “For this reason, he no longer looks to himself — he should no longer look to himself — but is turned towards God and his brothers and sisters. It is no longer ‘a fluttering heart,’ allured by momentary whims, shunning disagreements and seeking petty satisfactions …. Rather, it is a heart rooted firmly in the Lord, warmed by the Holy Spirit, open and available to our brothers and sisters.”

“To help our hearts burn with the charity of Jesus the Good Shepherd,” the pope told priests, “we can train ourselves to do three things suggested to us by today’s readings: seek out, include and rejoice.”

Regarding the first — to seek — the Holy Father, in unscripted remarks, reminded priests of the power of Eucharistic Adoration and silent prayer before the Lord, in seeking souls for Christ: “Sometimes he has to go out, talk, persuade,” he said. “Other times he has to remain before the Tabernacle, battling for souls.”

“In every Mass,” Pope Francis concluded, “may we truly make our own Christ’s words: ‘This is my body, which is given up for you.’  This is the meaning of our life; with these words, in a real way we can daily renew the promises we made at our priestly ordination.”

After the Mass, Pope Francis spent nearly two hours greeting and speaking with priests in the square. Aleteia spoke with some of the priests present.

Fr. Joseph from Central Nigeria, who was at the Mass on Friday with his brother priests, described the day as “pregnant” with meaning for all priests. “In the first place,” he said, “because today we have celebrated the feast of the Sacred Heart, which is very important to our faith, that Jesus gave himself. Anyone who gives his own heart has given everything.”

“It is also the celebration of the Jubilee for Priests,” he added “so that priests will be a reflection of the mercy of God, a symbol of the mercy of God as he walks among the people as a shepherd, and guides the flock in a merciful way, knowing full well that he, too, is also weak and is a sinner.”

Fr. Joseph and his brother priests from Nigeria said that the faith is “very much alive” in their country, “especially among the young people.”

His brother priest who works in northern Nigeria where Boko Haram began, said: “For me, this celebration speaks to the whole world. The world is becoming more reckless, and heartless. The language of mercy is almost extinguished. And that is why you have so much killing in the world: from ISIS to the Taliban, to Boko Haram, to abortion and euthanasia. The culture of death has spread around the world. So I think for the pope to declare this Year of Mercy is quite a dream. As far as I am concerned, it is God who is speaking to us, calling us to return to that Heart of Mercy and Love.”

“It strengthens our solidarity, our oneness, our fraternity, and gives us an experience of the universal Church. We have been here for three days, speaking almost one language, the language of the Heart of Jesus,” he said.

Aleteia also spoke with Msgr. George Brubaker, from Our Lady of Fatima Parish in Wilmington, Delaware, who travelled to Rome for the Jubilee for Priests. Monsignor was among the priests in attendance at the Basilica of St. Paul’s Outside the Walls for for Holy Father’s retreat talks on Thursday, and he noted how “energized” the pope himself was “to see the priests and to reach out to us.”

“Priests are here from all over the world,” Msgr. Brubaker told Aleteia after the Mass at St. Peter’s on Friday. “I didn’t expect that the Holy Father would spend so much time after the Mass with the priests. I think that Pope Francis is reinvigorating the whole Church. His style is so personal, I’m hoping to catch a little bit of that, and I think I did.”