Refusing Baptism at 35,000 Feet and Descending 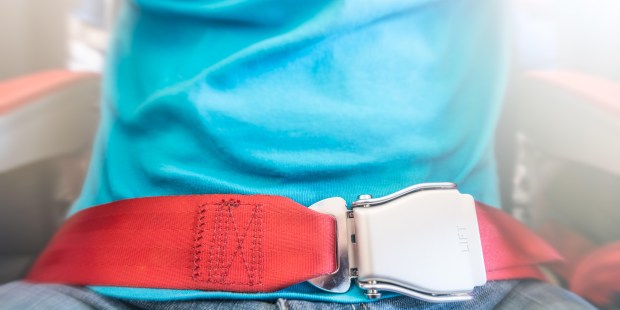 A 30-year-old “he said-she said” aside, things happen in God’s good time

This story begins with a mother and her 14-year-old son flying home after a 10-day trip to Europe. The son is nervous. He follows foreign affairs like a sport and keeps a mental scrapbook of all the attacks launched by terrorists against Western targets. In the airports of Paris and Rome, he saw policemen in fatigues carrying tommy guns. Back home, the policemen wear revolvers in holsters and are fat.

The mother seems calm, maybe because has her nose buried in one of those English novels where everyone sips claret and nibbles on cucumber sandwiches for 600 pages. Or maybe because she has her boyfriend sitting beside her. The son and the boyfriend are fond of one another, but the son is unused to thinking of his mother as anyone’s girlfriend. Every time she throws her boyfriend a tender look, which she does constantly whenever her nose is out of that book, he wonders if he is spying on a stranger.

The plane starts dropping. A second passes, then another, then another. It feels to the son like riding a roller coaster at Six Flags. Judging by the screams that fill the cabin, that’s how it feels to the other passengers. The son doesn’t scream. Instead, he goes numb and thinks, “So this is it.” He’s just graduated from middle school and won’t enter high school until September, so nobody will read about him being killed by a terrorist except his relatives, who don’t count.

Just as this sobering thought crosses his mind, the plane levels off and he hears the captain telling everyone not to worry, it was just an air pocket.

Half a minute passes, and the plane starts falling again. Adults are not to be trusted, thinks the son, as passengers resume their screaming. But then the mother taps his shoulder and asks, “Do you want me to baptize you?”

The mother used to be Catholic. The son likes to make her talk about those days. She humors him with stories of mercurial nuns, guilt that squeezes like a python, a hell hungry for souls. In spite of herself, she makes being Catholic sound exciting. Fixing her in an ancient institution and belief system makes her easier to understand. The son suspects she is still a Catholic at heart, and he wants her to be one.

She looks serious. With a nod from him, she’ll sign a cross on his forehead with mineral water and he’ll be Catholic. But he sees she doesn’t believe in the sacrament she’s offering. She’s concerned with his feelings, not his soul. Like any self-respecting 14-year-old, the son shakes his head and tells his mother no thanks.

It’s a knee-jerk decision the son makes, to die unrepentant. But then the plane levels off again. This time it stays level until landing time.

I was the son in this story. Once I’d grown a little older, the generosity of my mother’s offer knocked me flat. So what if she’d lost faith in God, or in her own ability to confer a sign of His grace? Her first and last thoughts, as we plummeted to our apparent doom, were of her son. More maternal – or, for that matter, more Christian – than that, one simply can’t get.

But she insists I’ve got the story backwards: I was the one who asked her to baptize me, she says.

Authorial pride to one side, I prefer my version — everyone comes off looking so much nobler. If she’s right that I reversed events in my head and have been deluding myself ever since, then it’s a darned good thing I found my way into the Church eventually. Fools who insist on having things so lofty just aren’t safe out in the world.