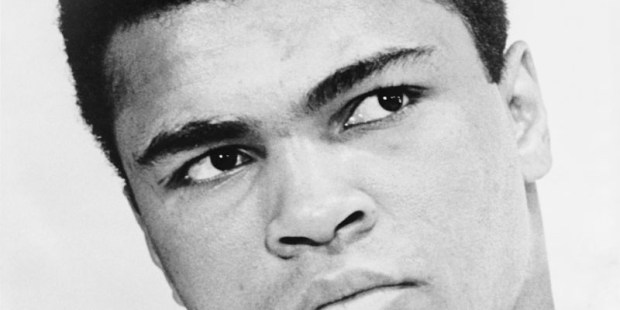 “It’s always a victory to finish a thing in a set time,” he told Harvard students and faculty

The legendary Muhammad Ali, born Cassius Clay in January of 1942, died tonight at the age of 74, after suffering for decades from Parkinson’s disease.

A handsome and charismatic athlete and convert to Islam, Ali decried the extremists practicing jihad through terrorism. After turning to Islam, he refused to serve in the U.S. Army, citing his religious beliefs.

Considered by many to truly be “The Greatest” heavyweight champion in the history of boxing, Ali went professional after winning a gold medal in the 1960 Olympics in Rome and dominated the sport, retiring in 1981 with a record of 56 wins (37 by KO) and five losses.

In 1975, saying that in his life he had made a study of “what you don’t learn in school … common sense,” World Heavyweight boxing champ Muhammad Ali sold out Harvard’s Burden Auditorium for a memorable night of “poems and parables,” taking time to share his thoughts on friendship.

“One learns friendship by being one,” Ali said. “If a man extracts in return all he does for a friend then it is business, not true friendship.”

Ali, who was famous for his use of descriptive patter — he coined the phrase “float like a butterfly, sting like a bee” — and for spouting braggadocious rhymes about his mastery in the ring (“Clay swings with his left, Clay swings with his right / Look at young Cassius carry the fight”), also shared with the Harvard audience his “shortest poem ever written on what it’s like to be as great as Ali.” It consisted of only two words:

For readers too young to appreciate the energy, wit, playfulness and speed of this remarkable American athlete and personality, here is a sample.