Muhammad Ali: No One Was More “Game” Than He 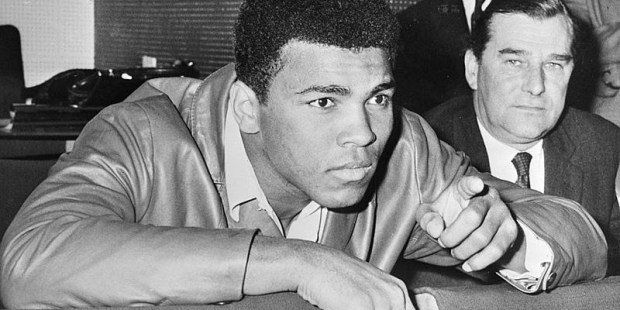 In the old days, “game” could be used, as an adjective, to mean “having a fighting spirit; plucky” or “having the required spirit or will.” Teddy Roosevelt had these meanings in mind when he counseled the boys of America: “I want to see you game, boys.” It is by exemplifying the quality of game-ness, more than for any other reason, that the late Muhammad Ali commends himself to the world’s attention.

Ali, who died June 3 at the age of 74, had spent the last few years lying lower than usual. Boxing, the sport in which he made his name, is now virtually eclipsed by mixed martial arts, so perhaps a precis of his career is in order. Over three decades, from 1960 through 1981, Ali fought 61 fights and won 56 of them. On three separate occasions – in 1964, in 1974, and again, in 1978 – he defeated the top-ranked heavyweight fighter to reign as the division’s linear champion.

Ali can also be said to have licked Uncle Sam – or at least his local draft board. Citing religious objections to the Vietnam War, he refused induction into the army, was convicted of draft evasion, and got the conviction overturned only after appealing to the Supreme Court. Fighting this fight in the name of conscience cost the champ his first title, his boxing license, and four of what would surely have been his peak years. Had the court ruled differently, it could have ended his career.

For African Americans fed up with mistreatment by the white establishment, Ali was a spokesman, a role model and – in every sense of the word – a champion. But he rejected the role of underdog. Early on his career, he decided that it was better for publicity purposes to be hated as a “blowhard, a loud-mouthed braggart.” Thus, the Louisville Lip made himself the bully of many bullies, including Sonny Liston and George Foreman. Though never a power puncher, he dominated his opponents with fast, inventive combinations, and through his relentless heckling, which sometimes went well beyond the boundaries of good sportsmanship.

“I hated every minute of training,” Ali tweeted in 2013, “but I said, ‘Don’t quit. Suffer now and live the rest of your life as a champion.’”

Ali liked to be seen as a natural, a born winner. But in fact, no athlete has ever been a more diligent steward of his gifts. Long before he lost his famous speed, he would spend hours training his body to take punches. The conditioning process must have been tedious, not to mention painful. But Ali’s dedication and foresight would pay off in Kinshasa, where he absorbed dozens of potential knockout punches from an amped-up George Foreman before coming off the ropes to knock the young champion out.

Ali’s cocksure ring persona hid his belief in a Being even greater than himself. In 1964, he joined the Nation of Islam and renounced his birth name, Cassius Marcellus Clay, Jr. However, after the death of NOI leader Elijah Muhammad, with whom he’d feuded on occasion, Ali followed Muhammad’s son Warith Deen Muhammad in adopting the beliefs and practices of Sunni Islam. Later still, he became a devotee of Inayat Khan’s Universal Sufism. Many observers have remarked that black separatist theology could never really have suited him – he was too ecumenical in his choice of friends.

Indeed, Ali made a free gift of his time and person even to strangers. Often, while he was still fighting, he would open his training camp to visitors. He also pursued a second career as a philanthropist and goodwill ambassador that outlasted his retirement by decades. Even after the effects of Parkinson’s disease, with which he was diagnosed in 1984, became visible, he continued appearing in public and displaying his wounds in a way that anticipated St. John Paul II.