Teenage Mutant Ninja Turtles: Out of the Shadows and Into the Toy Store 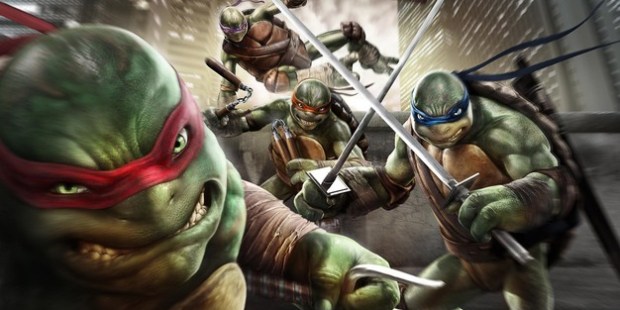 For the targeted audience, the latest adventure of our heroes on a halfshell is still a fun trip

Last year, someone managed to dig up the fossilized remains of a never before seen species, since dubbed Pappochelys, that many scientists believe to be the turtle equivalent of the missing link in turtle evolution. Biologists cheered, creationists remained skeptical, and we Catholics… well, we mostly yawned.

After all, whether God popped out every creeping thing which crawleth on the earth in one literal day or instead took the scenic route through a divinely-guided evolution, our beliefs are covered. Basically, we just thank God there are turtles in the first place because they’re really kind of neat.

Why am I blathering on about turtle evolution in a movie review? Two reasons: One is that I have to talk about something since Teenage Mutant Ninja Turtles: Out of the Shadows has a five-second plot. Basically, after the villainous Shredder escapes custody, he is contacted by the evil alien Krang who co-opts Shredder into a plan to enslave the earth. Aided by his newly mutated henchmen, Bebop and Rocksteady, and by mad scientist Baxter Stockman (amusingly played by Tyler Perry as sort of an insane Neil deGrasse Tyson), Shredder sets out to find the parts necessary to construct a machine that will allow Krang passage into our dimension. The Turtles, along with reporter April O’Neil and hockey-masked vigilante Casey Jones, try to prevent this from happening. Should I continue? It’s a threadbare plot perfectly suited for a 30-minute cartoon.

Which brings up the second reason for talking about turtle evolution. Whether or not you enjoyed 2014’s Teenage Mutant Ninja Turtles (I myself was lukewarm), there’s no denying it was an attempt to try something new. With modern CGI and Michael Bay approved mass destruction, the movie went for a slightly grittier, more realistic take on the characters.

Not this time around. This movie is nothing short of an evolutionary throwback to the 1987 cartoon series that made the Turtles a household name.

And there’s nothing wrong with that. It’s the TMNT, so just how deep does it really need it to be? For example, in a scene that lasts less than five minutes, Shredder meets Krang for the first time, listens to his spiel about conquering the earth, and agrees to join in no questions asked. Sure, why not? One of them is a sociopathic ninja master dressed in armor with blades sticking out everywhere, the other is a lumpy brain creature living inside the stomach of a ten-foot-tall robot. Of course they’re going to want to conquer the earth. Just look at them. There’s no need to waste time discussing their motivations, so the movie wisely doesn’t.

The film also gleefully wallows in the memories of the toy craze that accompanied the original television series. For the first big action sequence, the Turtles arrive in their made-for-merchandising battle truck, complete with a grill that shoots out manhole covers and two robotic arms that swing giant nunchucks. Bebop and Rocksteady join the action on choppers that look fresh out of their store packaging. It sounds a bit cynical in writing, but on screen it’s just plain fun.

Such silliness isn’t for everyone, of course. The majority of my peers in movie-critic land are bound to loathe it, but this isn’t the kind of movie made for them anyway. Teenage Mutant Ninja Turtles: Out of the Shadows is a film aimed squarely at younger viewers who won’t mind the lack of complexity and for older fans looking for a little TMNT nostalgia. For those two groups, this latest trip with the Turtles should prove an entirely enjoyable outing.