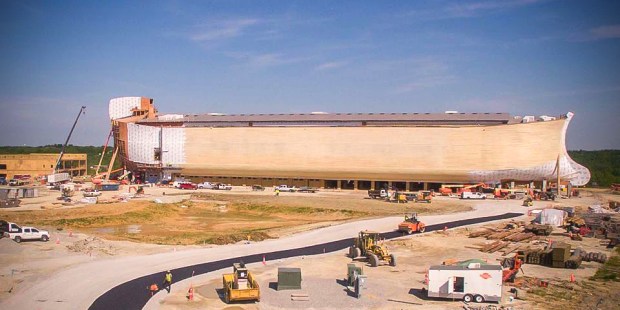 Williamstown, Kentucky, 30 miles south of Cincinnati, is home to Ark Encounter, a theme park whose main attraction is a reproduction, literally of biblical proportions, of the very famous Noah’s ark.

Being 510 feet long (or 300 cubits, strictly following the biblical description of the legendary ship), the ark is already the biggest timber-framed structure in the United States. Actually, its total surface area rises up to 120,000 square feet; that makes it just over twice as large as the White House, and longer than three space shuttles laid end to end — so, yes, you can bet Noah indeed had room for a pair of each animal.

The park itself, though, will only feature a petting zoo.

While the park’s builders (Answers in Genesis, a Protestant Christian organization) have funded the budget of about one hundred million dollars privately (without using any public funds or taxpayer money), the project has indeed raised a bit of controversy. Those who want to work in the park must sign a clause attesting to being faithful Christians (regardless of their denomination), as reported by Alain Sherter for CBS News.

It is expected that a river of tourists will be — ironically enough — flooding the site from the park’s inauguration this coming July. It’s a pity the ark doesn’t float!