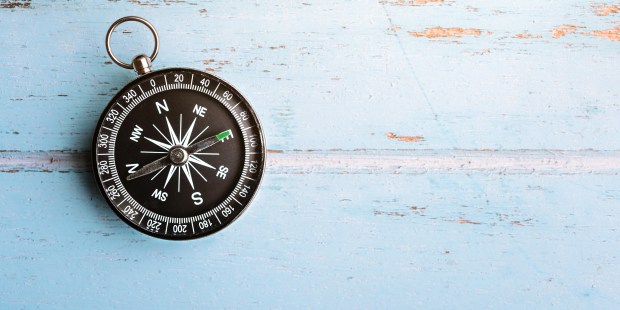 Could we use some practice in turning away from ourselves, at least once a week?

A newcomer to our town visited our parish as part of her shopping to find a church home. After I greeted her and asked where she was from and how she was settling in, she blurted out, “What’s up over at St Mary’s? We went there last week and the priest had his back to the people the whole time!”

She was surprised and bewildered to find that the Masses not only at St Mary’s but also at another parish in town were celebrated ad orientem, or “towards the East.” The far end of the church is called “the East” because churches were originally built facing the rising sun and towards Jerusalem. Before the second Vatican Council all masses were said ad orientem but the Council’s liturgically revolution literally turned things around. The priest began to stand on the other side of the altar, and this position for saying Mass is called versus populum —towards the people.

Last week the French publication Famille Chretienne published a lengthy interview with Cardinal Robert Sarah, the Prefect for the Congregation for Divine Worship and the Discipline of the Sacraments, in which he urges a return to Mass being celebrated ad orientem and explains why. To get the right answer we must first ask the right question, and the question is “Mass? What’s the point?”

There are two possible “points” or focuses for the Mass: God or the People of God. In ad orientem celebration of Mass the priest is not so much “turning his back to the people” as he is facing the same way as his people and praying with them. Together their orientation is away from themselves and towards God. The “point,” therefore, is to turn our hearts to the Lord.

It seems obvious that God should be at the center of our worship, and Cardinal Sarah explains that the liturgy “is the door to our union with God. If Eucharistic celebrations turn into human self-celebrations, there is a great danger, because God disappears. We have to start by placing God back at the center of the liturgy. If the man is the center, the Church becomes a merely human society, a simple NGO.”

At the heart of the Christian experience is repentance and conversion of life. The word metanoia or repentance actually means “turning in a new direction.” Therefore, at Mass when we orient ourselves toward the tabernacle, toward the Lord’s presence, we are turning in a new direction—turning away from ourselves and toward him. There are various times within the celebration of the liturgy when the priest can turn toward the East with the people: during the penitential rite, the Gloria, the prayers of the faithful and the prayer of consecration.

After everyone has got used to the Mass being celebrated with the priest facing the people, wouldn’t this be yet another unnecessary revolution? After all, don’t the documents of Vatican II dictate that Mass is celebrated facing the people? Actually, nowhere is the question addressed. It is assumed that the priest will celebrate Mass ad orientem, and in the missal the directions call for the priest at various points to “turn and face the people” assuming that he is already facing away from them. Cardinal Sarah emphasizes, “More than fifty years after the close of Vatican II, it becomes urgent for us to read its documents! The Council never required celebrating Mass facing the people! This question was not even addressed by the Constitution Sacrosanctum Concilium …”

When the priest celebrates Mass facing the people it is difficult for his focus not to be on the people, and for their focus not to be on him. Human experience expects a face-to-face interaction when the body language is face-to-face. When the priest turns to face the same way as the people both priest and people turn toward the Lord in a corporate act of worship and devotion. The orientation of the whole act of worship therefore shifts away from the people and the priest and toward the Lord. These points are made not only by Cardinal Sarah, but also by Pope Benedict in his classic The Spirit of the Liturgy and by Fr. U.M Lang’s now standard work on the subject, Turning Towards the Lord: Orientation in Liturgical Prayer.

Will Cardinal Sarah’s point be taken? Can we expect priests around the world to suddenly start celebrating Mass praying in the same direction as their people?

It’s not likely for several reasons. Firstly, many of the priests themselves are not fully aware of the issue. Secondly, even those who favor the change realize that for it to work, extensive and repeated catechesis is required. At St Mary’s in Greenville, South Carolina, the pastor, Fr. Scott Newman prepared his people for the change to ad orientem worship over a period of six months. The parish website contains an excellent article which reminds his parishioners and explains the custom for those who are new to the parish.

Fr. Newman has implemented ad orientem worship in his parish and says there have been no significant complaint from parishioners, but visitors like the one who spoke to me are bewildered and often offended by ad orientem celebration of Mass. If they are older they perceive it as a pointless attempt to return to a pre-Vatican II church; if they are younger they are simply confused and annoyed. Furthermore, while some priests are unaware of the issue, many others prefer versus populum celebration of the Mass, believing it to be superior for pastoral reasons.

Fr. Chris Smith, who is the pastor of Prince of Peace parish in Greenville and celebrates both the Ordinary and Extraordinary Forms of the Mass facing East, stresses that this is not a return to a pre-Vatican II liturgy. Should the occasion arise when he does celebrate facing the people he reports that, “invariably at least one altar server comments, ‘Father, why are we facing the wrong direction? Shouldn’t we be facing God when we talk to Him?’”

No matter what position we take, all Catholics should at least agree with Cardinal Sarah’s main point, that the focus of our worship is God and not us. The point, therefore, of Mass is God the Father Almighty. However he celebrates Mass, the priest’s role is to turn our hearts, for one reverent hour, from this world to the next, so that rising from worship we might return to this world to love and serve the Lord.

[Editor’s Note: — Take the Poll, Have you ever attended a Mass prayed ad orientem?]