Vatican Announces: Sick and Disabled to Be Given Lead Roles in Papal Mass 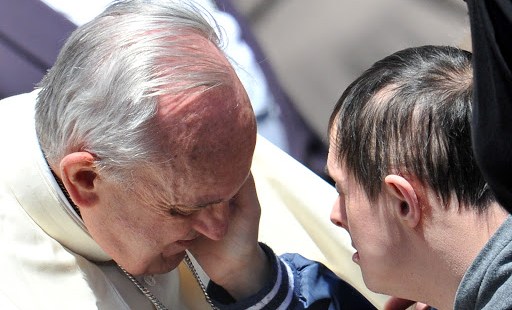 VATICAN CITY — For the first time in history in St. Peter’s Square, the Gospel Reading at a papal Mass will be dramatized by a group of intellectually disabled persons so the text can be understood by pilgrims with mental disabilities, the Vatican announced today.

Speaking at a press conference on the Jubilee for the Sick and Disabled, which runs June 10 – June 12 in Rome, Archbishop Rino Fisichella, President of the Pontifical Council for Promoting the New Evangelization, also announced that, at this Sunday’s papal Mass, the Sistine Chapel Choir will be replaced during Communion by the “Amoris Laetitia” Choir.

The choristers, made up of disabled persons who use sign language, will sing Pane del Cielo [Bread from Heaven].

During the liturgy, other novelties will also be introduced. First, the liturgical service and the readings will all be carried out by people with disabilities. Several young men with down syndrome will be among those serving; a German deacon who is deaf will assist; the first reading will be proclaimed by a disabled person from Spain, while the second will be read in English, in braille, by a girl who is blind.

All of the Scripture Readings, and the Holy Father’s homily, will be translated at the Mass into international sign language, while the Prayers of the Faithful will be offered by the sick and disabled from various nations in their respective languages.

“As this is a Jubilee Day dedicated to the disabled, it is unavoidable that all of the attention is given to them,” Archbishop Fisichella explained. “Therefore, the Pope has also allowed the reading of the Gospel be dramatized, to grant the thousands of mentally disabled people who will be present to follow and understand what is happening.”

The archbishop also noted that, during the Holy Mass, the painting of Our Lady Salus Infirmorum [Health of the Sick] will be displayed. The 15th century painting, normally housed in the Church of the Madgalene in Rome’s Campus Martius quarter, was donated by a Roman noblewoman after her prayers for healing before the painting were miraculously answered. From then on, it has been venerated and invoked by the sick.

The three-day Jubilee for the Sick and Disabled at the midway point of the Year of Mercy. Archbishop Fisichella told reporters that over 9 million pilgrims have passed through the Holy Door since its opening last December 8, 2015.

The Jubilee will begin on Friday with a pilgrimage to the Holy Door, departing from Castel Sant’ Angelo and move along the Via della Concilizione to St. Peter’s Basilica.

On Friday evening at Rome’s Chiesa Nuova (which famously houses the relics of St. Phillip Neri), a catechesis will be given by Fr. Cyril Axelrod, a deaf-blind Catholic priest of the Redemptorist Order known for his work for the deaf and deafblind people around the world, especially in South Africa, China and the United Kingdom. Born deaf to Jewish parents, he later converted to Catholicism and became a Catholic priest, before losing his eyesight to Usher Syndrome. Despite his deafness and later blindness, Fr. Axelrod has worked tirelessly to help disabled people and has been an inspiration to many.

Two main events are planned for Saturday. In the morning, a time of prayer and catechesis called “Mercy: a source of joy,” will be held at various churches in Rome’s historic center, according to language group. Then, in the evening, a time celebration and entertainment will be held in the Gardens of Castel Sant’Angelo.

Jubilee Help for the Sick and Homeless

Archbishop Fisichella also noted that, during the Jubilee for the Sick and Disabled, the Med Tag Foundation — in collaboration with the Catholic Medical Network — will set up “Health Points” in the vicinity Rome’s four major Vatican Basilicas, to offer healthcare to the homeless. Some 350 volunteers — including religious, Red Cross workers, military and healthcare specialists — will offer free healthcare and examinations to an expected 700 homeless. The treatment includes general, dermatological, gynecological and pediatric care.

Fisichella concluded his presentation on the Jubilee for the Sick and Disabled, recalling the words Pope Francs delivered on the Jubilee of Divine Mercy: “The Gospel of mercy remains an open book, in which the signs of Christ’s disciples – concrete acts of love and the best witness to mercy – continue to be written. We are all called to become living writers of the Gospel, heralds of the Good News to all men and women of today. We do this by practicing the corporal and spiritual works of mercy, which are the hallmarks of the Christian life. By means of these simple yet powerful gestures, even when unseen, we can accompany the needy, bringing God’s tenderness and consolation.”

“It is in this spirit that, having now reached the midway point in the Jubilee Year, we wish to continue toward the end on November 20,” he said.