Faith in the Age of “Hyper-Reality” 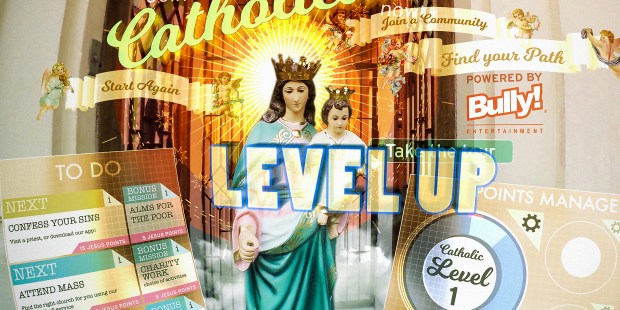 Matusda’s short film packs a punch. As hyper-reality becomes reality, how will the Church respond?

Depending on who you ask, the future looks grim – or awesome.

In the short film “Hyper-Reality,” designer Keiichi Matusda imagines a world in which gamification, social media, and digital ad campaigns have all converged into a single visual field superimposed on your surroundings, officially blurring the line between the technological world and the actual world.

If this seems like science fiction, it’s not – at least, not for long. Augmented reality products like Microsoft’s “HoloLens” and the Google’s discontinued “Google Glass” promise to blend the virtual and the real in the coming years.

But Matsuda takes this concept and pushes it into something like dystopian horror. Watch.

We enter the vivid, frenetic visual experience of a “Job Monkey” employee named Juliana Restrepo who rides the bus in Medellín, Colombia on her way to work as a personal shopper. She sees games, ads, notifications, and a “points manager,” all combined into a swirling deluge of 3D colors and shapes superimposed on the interior of the bus.

When an “inspiration guru” from the company chastises her for being late, Restrepo takes to Google to ask some of the biggest existential questions we all face: “Who am I? Where am I going?” She receives the most literal, surface-level answers available: You are plain old Juliana Restrepo, with three friends and no achievements, and you are going to San Antonio Exito to buy groceries. So she poses another question: “Can I start again?” A dialogue box results: “Reset Your Identity? Cancel/Reset.”

This question of identity returns when Juliana’s visual field begins to malfunction in the ad-filled grocery store, and a customer support rep refers to her as “Emilio.” Her “account” is apparently under attack, and Juliana is thrust back into reality without the augmentations: a dull grocery store, with dull people, and the dull sounds of a baby crying. Juliana sighs, and waits.

When she comes back online, she’s told she needs to follow a blue line to a service station to verify her “biometric” information. But there, a knife attack in her palm sends her into a tailspin and loss of identity. She turns to face a statue of Mary in a doorway. “A new life has begun!” a sign above the statue reads. Juliana rushes to the statue to “start again,” her visual field once again filled with vivid 3D images and colors. She asks to join Catholicism by swiping the shape of a cross, and receives a completely different sort of punch list: confess your sins, attend Mass, be baptized, alms for the poor, charity work, spread the word of God.

Images of Christ appear twice earlier in the video: once on the bus, and once in the streets of Medellín just before her palm is pierced. Equally easy to miss is the reference to Corinthians 5:17 on the sign above the statue. (“So whoever is in Christ is a new creation: the old things have passed away; behold, new things have come.”)

Juliana’s symbolic turn to Catholicism in this short film is more intriguing than it is offensive. And in an interview with Matusda, he makes it clear that the video is meant to put hyper-consumerism – not faith – on trial:

“Long-established industries and ways of working get torn down in a matter of years,” he explains, “and replaced by untested, unregulated systems. In this kind of accelerated capitalism, it’s easy to overlook the huge impact that this has on the daily life and routines of the people caught up in those systems. In fact the focus seems to be more on finding new ways to disrupt industries, and less about improving the quality of life for people.”

The interviewer then poses the question of Juliana’s adoption of Catholicism in this context. Matsuda responds: “Juliana is very passive, having adopted the belief systems presented to her, but external forces give her the chance to re-invent herself. Catholicism is of course a huge part of life for many people in Colombia and other parts of Latin America. It also seemed like the only belief system powerful enough to compete with neoliberal consumer capitalism.”

In an intriguing piece posted last year, Dr. Eugene Gan argues that our desire for hyper-reality – the apparent eschaton of “consumer capitalism” – mirrors the desire for communion with God that drives the Church. Both are driven toward what’s beyond our earthly experience, by the longing for something more real than reality.

But with “Hyper-Reality,” Matsuda raises several interesting questions in this regard. As hyper-reality becomes reality, how will the Church respond? What will evangelism and religious devotion look like when this happens? What should the Church change – or not change – to be present to this new world yet continue to fulfill its mission?

But maybe the bigger question is this: As this exponential development of automation continues to radically transform society and the family, shouldn’t the Church be talking about it more?

[Editor’s Note: Take the Poll – Are You Ready for Hyper-Reality]