Jean Vanier’s Challenge to Be Christ, All the Way 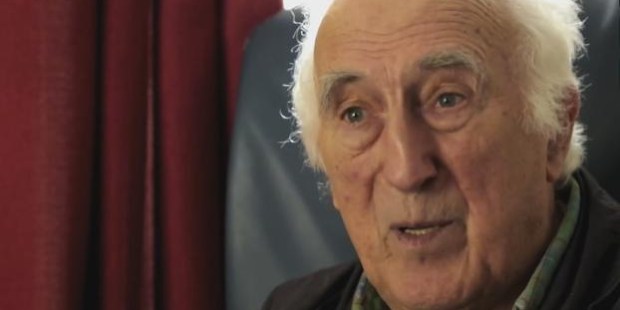 Perfect love casts out fear, and when fear is banished, it’s easier to choose to live

The hardy and sometimes stark truths and teachings of Catholicism will always be in tension with the world and its forever-fantasy that life is only really worth living when it is pleasant.

What dances upon a taut wire between heaven and earth, between the world and wonder, is one ever-present and mysterious challenge, and you might hate hearing it, because it sounds so corny.

It’s the challenge to love as Christ loved.

The Church is charged to make Christ’s love manifest on earth as Jesus did: through sacraments, yes, but first through presence, and companionship along roads both rugged and smooth.

How the Church embodies Christ’s love, brings the love, upholds the love — occasionally even placing love above the law, as Jesus did — directly impacts how we might upend the world’s legalisms and sensibilities or simply render them irrelevant, which is another way of winning.

Take Chris Bell who, through his network of Good Counsel Homes, is looking forward to baby number 1000 being born to yet one more single mother whom the world would just as soon have seen get an abortion.

But we know that perfect love casts out fear (1 John 4:18). Bell welcomes these women, whose affliction is not pregnancy but fear, and he companions them, and finally rejoices with them over the new life and new love they have delivered of and to themselves.

It is the willingness of Bell and his wife, and their consent to be Christ to someone who may have done everything wrong in her life up to that point, that has given so many women the heart to continue down an uncertain path, choosing to let life have its way.

Consider the Sisters of Life, who similarly open their homes to women who might otherwise be swayed to the world’s “compassionate” solution. The Sisters seek nothing for themselves, except to serve — to be permitted to manifest Christ’s love. They too help women turn away from death and stick with life, as hard as it might be.

Neither Bell nor the Sisters can force anyone to choose life — not legally, and not morally, either, because they cannot forcibly usurp the free will of another — but they can offer enough love and valuation to the person before them that the woman hears what Pope Benedict XVI has said we all must hear: “It is good that you exist.” The demonstrated sincerity of this message is enough to defeat the codified law, defeat the sensibilities of the world, defeat death.

Now, consider L’Arche founder Jean Vanier, who has chosen to live most of his 87 years in the company of the “also-rans” of the world — the mentally or physically handicapped sorts that the world really doesn’t know what to do with, but would just as soon see “helped” out of their lives.

Vanier knows that this is the life his friends have, and they are entitled to have it. He knows, or recognizes, what we don’t want to admit to ourselves: that the world loves death, and against all of its legally-assisted powers, our only effective weapon, finally, is love — our own willingness to give something of ourselves to the lives of others in order to help them choose to live, even through terrible suffering.

Vanier has recently said an abundance of unambiguously pro-life things during an interview on assisted suicide (minutes 29-36), but he did so while talking about love and the secular law. His words, taken in context, argue that pro-death laws need safeguards that make room — legally — for offerings of companionship, valuation, for being Christ to people, because this is what defeats assisted suicide laws, defeats the world’s hunger for death. Asked about suffering people and their rights, Vanier talks about palliative care, and controlling pain,

“…not to go too quickly into [the suicide choice]. There should be a right for somebody who really wants to die, because of the intense pain. Yes, we can obviously accept that. But the question is how to encourage palliative care? Because we can move quite quickly into just the rights of a person who’s in pain. And so it’s really being attentive to those who are in pain, and how can we help people during these periods to die peacefully….we mustn’t go too quick to just say “there’s a legal right.” They also have a legal right to be walked with, accompanied, and helped.

Emphasis mine. “Helped,” he is clearly implying, to want to continue to live despite the ease of the law. Encouraged to live by our willingness to accompany.

Since that seemed unclear to some, Vanier issued a statement that needs to be unpacked.

“…the main thing is in any case to support life and to avoid all situations of suicide that originate in a situation of depression and solitude.”

When people are suffering, and they are alone and depressed, they are more likely to want to die. Vanier is all about people consenting to live with, be with, the people who need to hear that it’s good that they exist — that someone is willing to be a witness to their journey.

Again, as with Chris Bell, as with the Sisters: companion people and they will want life over death.

“My sister Therese, who was a palliative care doctor, has always said that 97 percent of people die fully conscious and without suffering. For the remaining 3 percent, they worked at finding a way to administer medication so that all could die without suffering.

If the correct sedative or medication has not been found one cannot oblige someone to live through an unrelenting agony.”

Recall the pragmatic truth: we cannot forcibly compel someone to choose life over abortion, neither can we strap someone down and force them to remain conscious through suffering that is more than they can endure.

If you have ever stood at a hospice deathbed and watched someone end in pain, you know that there reaches a point where people can no longer “die fully conscious and without suffering.” The morphine dose increases in proportion to the pain; eventually consciousness is lost and with it, the suffering. If the necessary dose hastens death, that is considered a secondary effect, the primary being the relief of unrelenting pain. That’s all Vanier is talking about, and it is morally licit.

“One must not take part of a series of remarks and take them out of context. The most important thing is to accompany people with a competent doctor and above all if possible involved in palliative care.”

I’m as pro-life as anyone I know, and when my brother was dying and people wondered if giving him “a shot to end his suffering” wouldn’t be the most humane thing to do, I responded,

“Do you think that giving my lionhearted brother a ‘compassionate’ needle would truly lessen our suffering, or his? By cutting short the process, do we step off the Via Dolorosa and avoid it all, or do we merely thwart a plan for our own lives? Should we steal from our brother the opportunity for him to reach out a hand and have it immediately grasped, to have everything about his existence affirmed, over and over? Should we steal from ourselves the opportunity to love?”

Listen to Jean Vanier carefully. Read his words without prejudice and with an eye toward all those things he says about what we need to do to help people choose life over death. It is an uncomfortable challenge, because what he is saying, in a nutshell, is that if someone is consciously choosing suicide (or abortion) then it means we have failed in love; we have not done enough to make people believe that it is good that they (or their babies) exist.

Pounding on keyboards and repeating the law is not enough; defeating the culture of death requires something more of us; it requires and must consume our very selves, our very lives, just as it has consumed the lives of Chris Bell and his wife, the lives of the Sisters of Life, the life of Jean Vanier.

“The law of the Lord is perfect…” (Psalm 19:7) but people only come to understand that when love is the introduction to the law, and its conclusion. Chris Bell, the Sisters of Life and Jean Vanier have all chosen to love first. If we all could do that, deliberate death would find no foothold in the consciences of the fearful, the lonely, the depressed. And that would bring victory.

The challenge is to be Christ to others, not in fits and starts, but every day, and all the way.