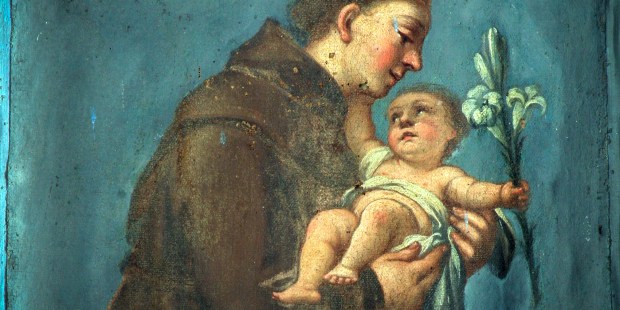 He is a great help with more than just finding lost things!

Today (June 13) is the feast of Saint Anthony of Padua, a Franciscan priest, who was famous for his preaching during the 13th century. However, he is more popularly known for his intercession when an item has been lost. He is often invoked with the prayer, “Tony, Tony, come around, something’s lost and can’t be found.”

Saint Anthony is also known for the prayer of exorcism that he gave to a woman oppressed by a demon during a dream she had of the saint.

He is the author of numerous sermons, many of which have been preserved through the centuries. Because of his teachings and example, Saint Anthony was declared a Doctor of the Church in 1946.

To help us appreciate the life of Saint Anthony (and not invoke him only when we lose our car keys) here are ten inspiring quotes from a true disciple of Saint Francis:

1) “Actions speak louder than words; let your words teach and your actions speak.”

2) “Earthly riches are like the reed. Its roots are sunk in the swamp, and its exterior is fair to behold; but inside it is hollow. If a man leans on such a reed, it will snap off and pierce his soul.”

3) “Attribute to God every good that you have received. If you take credit for something that does not belong to you, you will be guilty of theft.”

4) “Solicitude for material things distracts the soul and divides it. The devil seizes the divided soul and drags it to hell.” **

5) “Christians must lean on the Cross of Christ just as travelers lean on a staff when they begin a long journey.”

6) “The spirit of humility is sweeter than honey, and those who nourish themselves with this honey produce sweet fruit.”

7) “Anyone, then, who desires to live chastely in Christ Jesus, must flee not only the mouse of lust, but even from its very scent.”

8) “The creator of the heavens obeys a carpenter; the God of eternal glory listens to a poor virgin. Has anyone ever witnessed anything comparable to this? Let the philosopher no longer disdain from listening to the common laborer; the wise, to the simple; the educated, to the illiterate; a child of a prince, to a peasant.” **

10) “The saints are like the stars, who, in His providence, Christ hides under a seal, lest they appear whenever they wish. Instead, they are always ready to disembark from the quiet of contemplation into the works of mercy at the time decided upon by God, whenever their heart should hear the word of command.”

**Quotes changed due to misattribution