Christians United with the Victims of Orlando 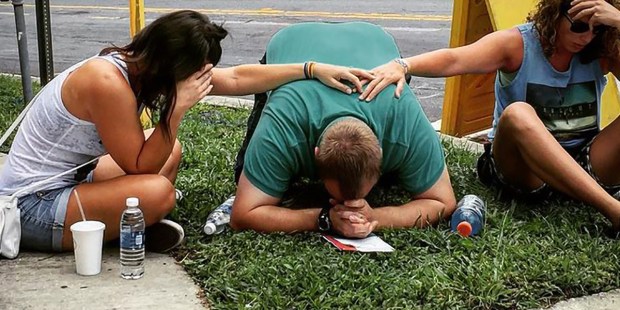 I thought about Julian Green at Mass the morning after the slaughter of patrons of an Orlando gay nightclub.

Julian Green was a homosexual and a Roman Catholic convert who kept a diary through much of his long life in Paris. He understood better than most the mystery of iniquity, the status of every Christian as a sinner, and the immense patience and mercy of God.

Those who share Green’s faith are uniquely placed to reach out with love to the homosexual community this week. After all, we are now united with them as victims of the same hate.

The specter of ISIS was raised early on in news stories about the Orlando slaughter. ISIS recently threatened that it would target Florida, the gunman was reportedly devoted to ISIS, and ISIS has a history of attacking homosexual people.

They also, of course, have a history of attacking Christians, in a years-long systematic effort that has been called a genocide by the U.S. government.

ISIS attacks on Christians sprang into American headlines in January 2015, when a YouTube video called “A Message Signed in Blood to the Nation of the Cross” was released, showing a long row of Christians being beheaded on a beach by black-hooded ISIS killers.

“People of the Cross.” That’s what they call us. That’s fine with us, because that’s who we are: We are baptized into the death of Jesus, we sign ourselves with the cross, and we put the cross front and center in our churches, homes and institutions.

The cross is the proud badge of our identity, but we have sometimes fallen short of what it represents.

We know better than that. We know from Christ’s example what “People of the Cross” look like.

On Sunday morning after the Orlando shooting, I sat before Mass at St. Benedict’s Church in Atchison, Kansas, and stared at the large mural above the cupola.

The painting, by Theodore Barasch, could be called “People of the Cross.” All of humankind is represented. The soldier, Longinus, is the unreligious person who suddenly sees meaning, through the person he recognizes as  “the Son of God.” The Blessed Virgin Mary and St. John are there; figures who have quietly lived lives illuminated with meaning by their relationship to God. Mary Magdalene, in a heap at his feet, is the sinner who has escaped meaninglessness by grasping her Lord. The Pharisee in the picture is the self-righteous one who, in his fury at sin, has turned his back on everyone.

Jesus is in the center, arms wide, uniting and defining the whole group.

Julian Green, whose homosexuality especially dominated his younger life, was a “person of the cross” like Mary Magdalene. He once told a priest: “Sin gives an experience of life that can be turned to immense advantage, spiritual advantage. Sin educates the individual, is a sort of school where he learns to know humanity. God allows souls that have lived in sin to escape from it and then grow closer to humanity than souls that have never lost their innocence.”

But the priest pointed out to Green that Magdalenes are not the only ones who can speak to sinners.

He said, “Very spiritual souls intuitively know sin to such a degree that it amounts to a perfect knowledge of all aspects of the problem.”

Pope Francis reached out immediately. The Vatican described him as “sharing in their indescribable suffering” and “entrusts them to the Lord so they may find comfort.”

U.S. bishops’ head Archbishop Joseph Kurtz said, “Waking up to the unspeakable violence in Orlando reminds us of how precious human life is.” He called Catholics to “solidarity with the suffering and to ever greater resolve in protecting the life and dignity of every person.”

In the wake of the tragedy of Orlando, all of us — Longinuses, Magdalenes and Beloved Disciples — have a duty to reach out with kindness, comfort and courage. What is forbidden is to turn our back on the suffering.

After all, they are suffering with us.