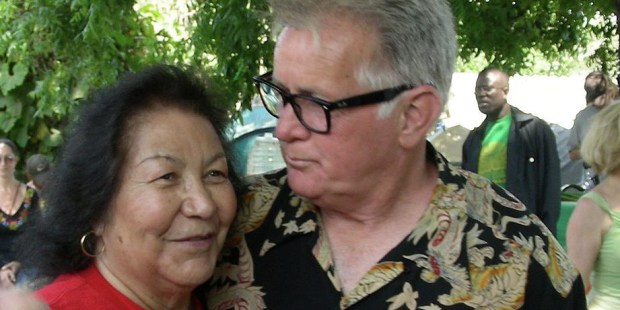 Her husband may have been the face and the voice of the United Farm Workers movement, but Helen Fabela Chavez may have been its heart.

Helen Chavez, widow of the iconic union co-founder and activist Cesar Chavez, was 88 years old when she died on June 6, after having battled an unspecified infection for several weeks. Notoriously shy of the press, and preferring to hang in the background, she was nevertheless credited as being the strong foundation from which her husband was able to launch his activism.

The farmworker’s dream is to get away from the fields, move to the suburbs and raise a family — to leave behind that hard toil, Paul Chavez said. Cesar Chavez had achieved that when he asked his family to leave their Los Angeles suburb and return to the fields. He asked for Helen to return to the fields. She wouldn’t refuse, returning to the same fields she picked as a child.

“They made the decision in 1962 to leave the most comfortable life they ever had to move to Delano, go back to the fields and start organizing, and my father never would have made that decision had my mother not been on board 100 percent,” Paul Chavez said after his mother’s burial.

Helen acknowledged that a decade ago in a series of interviews with longtime United Farm Worker spokesman Marc Grossman. Despite being in the background, she held a steadfast dedication to la causa, but always preferred to stay out of the spotlight.

“She didn’t want none of this,” her brother, Frank Fabela said, referring to the large funeral. “She didn’t want to be noticed.” If she saw the hundreds of people, the procession and television cameras broadcasting it, he said, she would be “turning over in her casket.”

Still, her sacrifices were many. She was arrested for the cause, and famously thrust the UFW into standing in solidarity with Filipino farmworkers, when during a debate about whether to strike alongside them, she chimed in and asked, “Are we a union, or not?”

The tributes and honors began immediately, continuing even to her June 13, funeral, presided over by Cardinal Roger Mahony, the retired archbishop of Los Angeles, who noted a message of blessing from the office of the Papal Nuncio:

[She] was laid to rest Monday beside her husband and just a few yards from her home in La Paz. Though she’s often memorialized as “the woman behind the man,” her son, Paul Chavez, said she was more like the woman standing beside him.

If not for Helen Chavez’s support, the farm worker movement may never have happened.

Chavez’s selfless determination to create change for thousands, her tirelessness and sacrifice was pointed out over and over by loved ones Monday at St. Malachy’s Catholic Church in Tehachapi, where Cardinal Roger Mahoney, retired archbishop of Los Angeles, presided over the the Mass of Christian Burial earlier in the day. Pope Francis sent his condolences.

Her propensity for hanging back, for preferring the supportive background to fame and accolades shaped her whole life, which was lived, very much, for the sake of others. Richard Ybarra — married to Helen Chavez’s daughter Anna — made a lovely tribute to his mother-in-law, calling her “the unspoken key to Americas first successful farmworkers’ union” in a memorial he sent to his friends, and which we excerpt here:

She was the daughter of a Mexican Revolution Colonel who rode with Pancho Villa, and a strong spirit was in her DNA…In the Chavez household, even after her husband achieved fame, Helen’s personality created an atmosphere anchored by humility and a regular home life. She endured bomb threats, around-the-clock security at her home, harassment of her children in the schools and the scarcities that came from Cesar’s voluntary poverty. The Chavez children were well-guided and a lifelong bond was cemented through the example offered by their mother. Because of Helen’s guidance, no Chavez offspring has ever gloated or made claims about their father or by extension themselves, of being famous. He was just “dad.”

Helen Chavez was the perfect mother figure, respected anchor and beloved matriarch of her family. A large part of her persona were the facial expressions that reflected her feelings. She was the center of her children’s lives, sharing kindness, love and advice. She was extra special to each grand-, great- and great-great-grandchild. Loving and listening to each as if they were her only one. To her family, she was a beacon of hope and pride.

As a professional woman, I read of Helen Chavez with interest and admiration, and also with a little regret as I ponder times when I have failed in the sort of unconditional love and support that is modeled by her humility in life — a life where grace did abide, and was given room; the life of a woman in full. Requiescat in pace. Amen.