How to Escape Our Islands of Isolation and Self-Affirmation 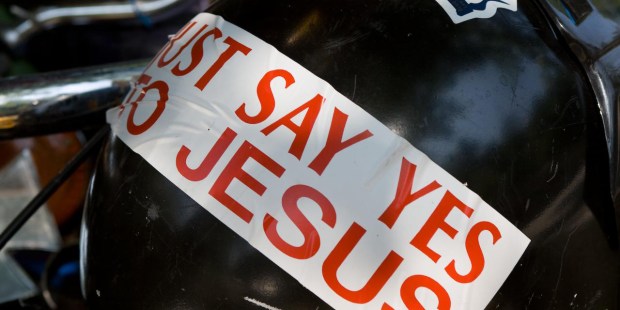 The other day, I walked into Braum’s, a local ice cream store, in Tulsa, Oklahoma with my mom. I spotted a young man in a baseball hat and a loud orange shirt. He was resolutely making his way toward the front door as we made our way in. His eyes widened as he took in my habit; nuns are a rare sight in the Bible belt. I could not read whether his reaction was positive or negative, but as he passed by, clutching his paper bag filled with ice cream, he yelled, “Jesus Christ the Son of God loves you and has saved you from your sins!”

When I was an atheist in high school in Oklahoma, I could not wait to leave my home state. I thought it was backward with its piety, guns, and patriotism. I was sick of random people walking up to me in parking lots and asking if I had received Jesus into my heart. I wanted nothing more than to escape this red swathe of ignorant, unwashed Christians in the middle of the United States and to find my home on one of the sophisticated, godless coasts. It was easy to live this way, to see the world in groups, and to view myself as a constant outsider.

I still do this to some extent. But now, every once in a while, I live differently, I see differently. It is God who smashes my fortifications and crosses my borders. He changes the way I view the world. He breaks me free from my own self-imposed ghettos and breaks people out from behind the walls I create between us. He helps me to see that I am others and they are me, in just about every way that matters. It is easy for me to judge, to say, “I am better than him. I am better than her.” But there is so much mystery in those statements. So many what ifs. So many unknowns. So many things that make those sentences fall to the ground useless. Before God, the only thing that makes any person worthy is the image of Christ in his or her soul.

The Trappist monk Thomas Merton once had a mystical experience in Louisville, Kentucky, in the center of a bustling shopping district, on the corner of Fourth and Walnut. He wrote about it later, saying:

“I was suddenly overwhelmed with the realization that I loved all these people, that they were mine and I theirs, that we could not be alien to one another even though we were total strangers. It was like waking from a dream of separateness, of spurious self-isolation in a special world.”

I think we all have tried at one point or another to live in this isolated world Merton speaks of, an island of self-affirmation with a select group of people. At least, this is a constant temptation for me, to self-isolate, to draw lines and to separate myself from others. I want to be special, but I want to belong, I want to be separate, but I want to find community. I think these are some of the primary temptations of our modern world.

These clashing, basic human needs lead us to pretend that we are different from others. They cause us to refuse to enter another person’s state of mind if we deem them unworthy of understanding. Instead, we find like-minded people and faint with relief when we do. We revel in united horror at the failings or ignorance of others and exhibit smug disbelief when other people, outside of our group, do terrible things. People like us think we are different from people who fall prey to using another person in a despicable way or to any other thing that horrifies us. We believe that somehow we are different, that somehow we have escaped the depths of the sins of humanity through our own self will and like flies we live skimming the top of the world, lapping the sweet milk of otherness.

“They were mine, and I theirs.”

That moment in the Tulsa Braum’s, surrounded by frozen ice cream, chocolate chips, and the wafting, sticky-sweet smell of waffle cones, was an instant of togetherness; boundaries fell open and strangers were united.

“Jesus Christ the Son of God loves you and has saved you from your sins!”

I am not sure whether that man who passed me by screaming praises to Jesus was trying to evangelize me, chastise me, or connect with me. I am not sure if he thought I was a Muslim, an Amish woman, or a sister in Christ. It doesn’t really matter. Either way, I understood. I connected with him for a moment, and I hope he connected with me.

Jesus truly is the Son of God who died for that man’s sins. For my sins. For your sins. For all of our sins.

For all of our sins.