When a Coach Is Also a Father Figure 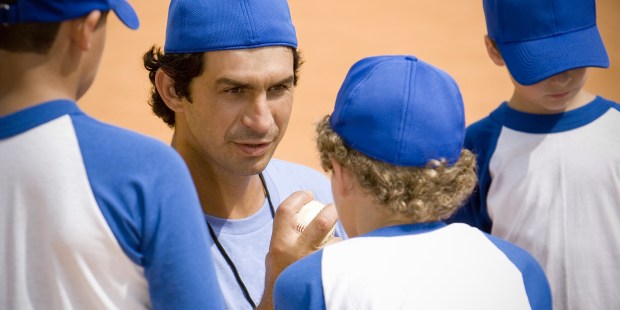 As Father’s Day approaches, it is good to consider that fatherhood is not always confined to the biological. Men are called to be fathers in everything they do, and that parental value is often seen in the area of sports. Whether it is in high school or professional sports, a coach’s ability to inspire is vital to a team’s success. Sometimes it is even more valuable: it can help model fatherhood to athletes whose own fathers are, for whatever reason, not in the picture.

One of the greatest examples a coach can give his team is to take his own faith seriously. Players respect a coach who can show them that there is something greater than the game, and more important than winning or losing.

A sport can consume the life of an athlete and becomes the most important aspect of his or her life. Without faith in God a simple loss, or a serious injury, can feel life-shattering – as though there is nothing, and they are nothing, without the game. Faith can then become a true stabilizer.  This is why it is of paramount importance that coaches lead by example and follow the words of the legendary Vince Lombardi, “Think of only three things: your God, your family and the Green Bay Packers — in that order.”

Thankfully, there are many great coaches who take their faith seriously, and we would like to highlight five of them. Each of them “raise” their athletes to know that, at the end of the day, everything moves on and that losing the Super Bowl is nothing compared to losing eternal life.

Joe Lombardi, Quarterbacks Coach for the New Orleans Saints – While he never knew his renowned grandfather, Joe Lombardi practices his Catholic faith with the same fervor. In an interview for the Catholic Sports Association, Lombardi said, “Your faith gives you a sense of perspective. It shows how the world is a small blip and we are working all toward eternity.” He also described his daily practice of the faith to The Compass, explaining how he starts “the day with morning prayer…pray[s] the rosary in the car on the way to work [and prays] evening prayer.”

Jack del Rio, Head Coach for the Oakland Raiders – Raised Catholic, Rio fell away from the Church after his parents were divorced. After a successful career as a linebacker in the NFL, he became a coach and was challenged by a colleague to reorder his priorities. After that point, Rio fought for his Catholic faith and made it a priority for his teams. He explained to the Denver Catholic Register, “We have a non-denominational service, and then a Mass weekly,” making faith a priority for each team he coaches.

Mike Krzyzewski, Head Basketball Coach for Duke University – Born to Polish-Catholic immigrants in Chicago, Krzyzewski has been coaching basketball for Duke since 1980, leading them to five NCAA championships. He is thankful for his Catholic upbringing and was inspired by a priest at his high school to integrate faith and life. In speaking to St. Anthony Messenger, Krzyzewski related, “By the time I went to [West Point], I was strong in my beliefs and I’ve maintained that throughout my life because I had such a good foundation.”

Rich Donnelly, Third Base Coach for the Seattle Mariners – A successful coach in the MLB, having won the World Series with the Florida Marlins in 1997, Donnelly was led deeper into his Catholic faith through the tragic death of his daughter. In an interview with the National Catholic Register, Donnelly shared how he realized, “The things of this world, no matter how flashy, will all pass away. What matters is where we spend eternity.” He has seen first hand the emptiness of players who put all their faith in money. Donnelly believes in Saint Augustine’s famous quote, “Our hearts are restless, O Lord, until they rest in thee.”

Mike McCarthy, Head Coach for the Green Bay Packers – Raised in an Irish-Catholic family in Pittsburgh, McCarthy has always taken his faith seriously and teaches his players to do the same. While speaking at a Catholic men’s conference in Green Bay, McCarthy explained how he asks his players, “What is your why?” For McCarthy, “God’s plan is the why. The next step is the how. What do you do with God’s plan? What do you do with this opportunity? When he opens that door, what are you going to do?” Before each game, McCarthy shares a scripture passage with the team and invites three captains to share inspiring words. He not only holds himself up to living the faith, but encourages his players to do the same.

In the end, these coaches embody an important aspect of fatherhood: by caring for the ethical, physical, and spiritual well being of their team, they communicate to their athletes that they have value beyond their sport. By coaching the whole person before them in life, they honor the whole person, and teach him or her to honor others in the same way.

Athletic competitions can display jaw-dropping talents and skills developed to their highest level, but these coaches remind us that when life demands we throw a “Hail Mary pass,” we do it from a place of deep faith.