Outpouring of Support for Autistic Girl Who Celebrated Birthday Alone 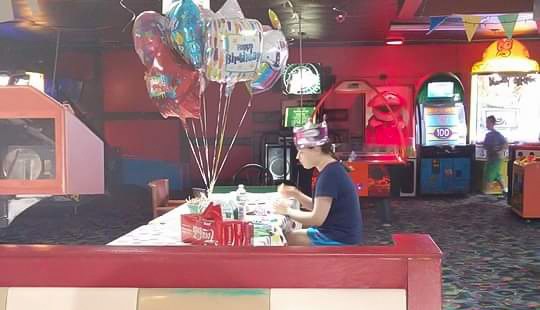 As lonely image goes viral, Pope Francis reminds society of need to reach out to the margins

No doubt the timing is coincidental, but with the worldwide reaction to a photo of a Bangor, Maine, autistic girl sitting all alone at her birthday party, it’s easy to imagine that Pope Francis had her in mind when he spoke about people on the margins.

The Pope, during his weekly general audience and catechesis on Wednesday, reflected on Jesus’ miracle of restoring sight to a blind man on the way to Jericho. That blind man, he said, represents the many people who, “even today are marginalized because of a disadvantage,” be it physical or otherwise.

The Pope said the man  is separated from the crowd that goes about its business as usual. “The street, which can be a place of encounter, for him is a place of solitude,” he said, according to a translation by the Vatican press office.

Francis said the image of the marginalized person is especially sad against the backdrop provided by the splendid city of Jericho, and he pointed out that Jericho, the place where the people of Israel arrived in after the Exodus from Egypt represents the Promised Land.

If that “sad” image has endured for 2000 years, the image of Hallee Sorenson, who is autistic, against the backdrop of a modern metropolis has already pulled many heartstrings, thanks to social media.

According to her mother, Allyson Seel-Sorenson, things as simple as a birthday party can sometimes be a challenge to arrange. Although Hallee loves spending time with people, it can be hard for her to make friends, according to a report in The Bangor Daily News. She doesn’t like large crowds and loud noises, so birthday parties are normally small and intimate.

So when she requested a real birthday party for her 17th birthday a couple of years ago, her family was excited. Many of her Bangor High School classmates showed up.

Then, last year, Hallee wanted to mark her 18th birthday party at a local bowling alley. She felt very comfortable there because she had been going there for years with the Special Olympics.

But when the big day arrived, last July 2, no one showed up to share in all the cake and ice cream.

Relatives from out of state texted Seel-Sorenson, asking how the party was going. She took a photo to text back.

“I texted that picture — that one picture of Hal I took. I was standing behind a pillar. I was crying,” Seel-Sorenson said. “No one showed up. No one called. Hallee just doesn’t understand. You can’t explain it to her. She operates at a 6-year-old’s level. She just doesn’t get it.”

That one picture Seel-Sorenson took of her daughter found its way to her niece, Rebecca Prefontaine, who also lives in Massachusetts. Prefontaine kept the photo all year. This week, she decided to make sure Hallee did not have an unhappy birthday this year. She posted the picture and a story Tuesday evening, hoping some friends of hers might send her little cousin some birthday cards.

“She’s a 911 dispatcher in a little town outside of Boston, and she shared that picture. I think she was hoping that some of her fireman and police officer friends might send a card,” Seel-Sorenson said. “I don’t think she had any idea that this would happen.”

Prefontaine’s Facebook post ended up with over 150,000 shares, and because of it, messages, birthday cards and gifts have started flooding in from all over the world.

Seel-Sorenson said that for people with autism it can be an uphill battle to build relationships with peers.

Meanwhile, Pope Francis in Wednesday’s talk recalled words uttered by Moses: “If one of your kindred is in need in any community in the land which the Lord is giving you, you shall not harden your heart nor close your hand against your kin who is in need. For the land will never lack for needy persons; that is why I command you: Open your hand freely to your poor and to your needy kin in your land.”