Pope Francis: Avoid the Temptation to Be Annoyed by the Needs of Others 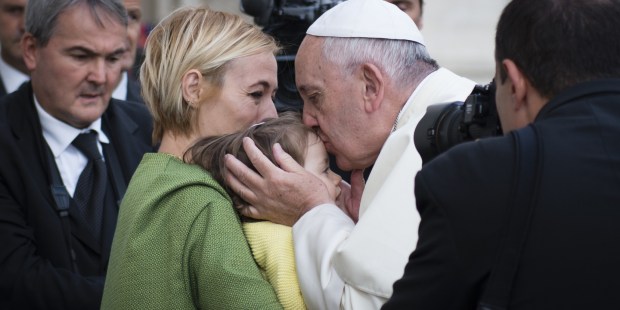 VATICAN CITY — On Wednesday, Pope Francis dedicated his weekly catechesis to Jesus’ miracle of restoring sight to a blind man on the way to Jericho (Lk 18:35-43).

Speaking to thousands of pilgrims in St. Peter’s Square, the Pope explained that “the blind man in Luke’s Gospel represents the many people, even today, who are marginalized due to a physical or some other kind of handicap.”

The blind man sat by the roadside as people passed by “engrossed in their thoughts.” For the blind man in the Gospel, and for many people today, our streets, which can become a place of encounter, instead become a “place of solitude.” In the case of the blind man, the Pope said, “large crowds pass by … and he is alone.”

The crowds in fact tried to silence the blind man sitting by the roadside crying out to Jesus, “as if he had no right to speak,” he said.

He then noted: “How often do we, when we see so many people on the street — people who are needy, sick, who have nothing to eat — feel annoyed. How many times, when we are faced with so many refugees and displaced persons, do we feel annoyed.”

“It is a temptation that we all have. All of us, me too!” he said. “That is why the Word of God admonishes us, reminding us that indifference and hostility make us blind and deaf; they prevent us from seeing our brothers and sisters and do not allow us to see the Lord in them.”

But the blind man fearlessly continues to cry out to the Lord, the Pope said. For “unlike the crowd this blind man sees with the eyes of faith.”

By encountering Jesus, the blind man went from a beggar to a disciple, the pope said. Yet “this is also our path,” he added. “All of us are beggars, all of us. We always need to be saved. And all of us, every day, have to make this step: from beggars to disciples.”

“Brothers and sisters,” Pope Francis concluded, “the Lord’s passing by is an encounter of mercy that unites everyone around Him, allowing us to see those who need help and consolation. Jesus also passes by in our lives, and when Jesus passes by, and I realize it, it is an invitation to draw near to Him, to be better, to be a better Christian, to follow Jesus.”

Two miracles occurred on the way to Jericho, Pope Francis said.  Jesus miraculously restored the sight of the blind man who believed; and “what happened to the blind man enabled the people finally to see.”

“The same light illumined everyone, gathering them together in the prayer of praise. Thus Jesus pours out his mercy on all those he encounters: he calls them, he enables them to come to him, he gathers them, he heals and enlightens them, creating a new people that celebrates the wonders of his merciful love. Let us allow ourselves to be called by Jesus, too, and let us allow ourselves to be healed by Jesus, forgiven by Jesus, and let us follow behind Jesus praising God.”