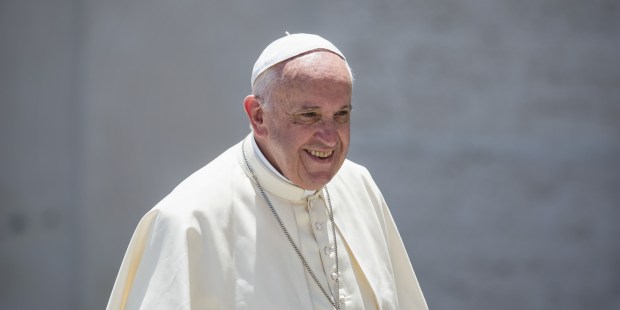 On Jesus’ miracle of restoring sight to a blind man

VATICAN CITY — Here below we publish an English translation of Pope Francis’ Wednesday catechesis for June 15, 2016, on Jesus’ miracle of restoring sight to a blind man on the way to Jericho (Lk 18:35-43).

Good morning. One day Jesus, drawing near to the city of Jericho, performed the miracle of restoring sight to a blind man who was begging by the roadside (cf. Lk 18:35-43). Today we want to grasp the meaning of this sign because it also affects us directly.

The evangelist Luke says that the blind man was sitting by the roadside begging (cf. v. 35). A blind man in those days — but also until not so long ago — could only live on alms. The figure of this blind man represents the many people, even today, who are marginalized due to a physical or some other kind of handicap. He is separated from the crowd, he sits there as the people pass by busily, engrossed in their thoughts and in many things … And the road, which can be a meeting place, instead for him is the place of solitude. Large crowds pass by … And he is alone.

The image of someone who is marginalized is sad, especially against the backdrop of the city of Jericho, the splendid and lush oasis in the desert. We know that the people of Israel arrived precisely at Jericho after the long exodus from Egypt: that city represents the gateway to the promised land. We recall the words which Moses pronounced at the time: “If there is among you a poor man, one of your brethren, in any of your towns within your land which the Lord your God gives you, you shall not harden your heart or shut your hand against your poor brother. For the poor will never cease out of the land; therefore, I command you, You shall open wide your hand to your brother, to the needy and to the poor, in the land” (Deut. 15:7,11).

There is a stark contrast between the recommendation of the Law of God and the situation described in the Gospel: while the blind man cried out, invoking Jesus, the people reproached him to keep quiet, as if he had no right to speak. They do not have compassion on him; in fact, they were annoyed by his cries. How often do we, when we see so many people on the street — people who are needy, sick, who have nothing to eat — feel annoyed. How many times, when we are faced with so many refugees and displaced persons, do we feel annoyed. It is a temptation that we all have. All of us, me too! That is why the Word of God admonishes us, reminding us that indifference and hostility make us blind and deaf; they prevent us from seeing our brothers and sisters and do not allow us to see the Lord in them. Indifference and hostility. And sometimes this indifference and hostility even become aggression and insult: “Throw them all out!”; “Put them somewhere else!” The people acted with aggression when the blind man was crying out: “But you, go away, come on, don’t talk, don’t cry out.”

Let us note an interesting detail. The evangelist says that someone in the crowd explained to the blind man the people’s motive, saying: “Jesus of Nazareth is passing by!” (v. 37). Jesus’ passing through is indicated with the same verb used in book of Exodus to speak of the passing over of the destroying angel, who saves the Israelites in the land of Egypt (cf. Ex 12:23). It is the “passage” of the Passover, the beginning of liberation: when Jesus passes through, there is always liberation, there is always freedom! To the blind man, therefore, it is as though his Passover was being announced.

Undaunted, the blind repeatedly cries out to Jesus, recognizing him as the Son of David, the awaited Messiah who, according to the prophet Isaiah, would open the eyes of the blind (cf. Is 35:5). Unlike the crowd, this blind man sees with the eyes of faith. Thanks to this, his supplication has a powerful effect. Indeed, at hearing him, “Jesus stopped, and commanded him to be brought to him” (v. 40). In doing so, Jesus removes the blind man from the side of the road and places him at the center of his disciples and the crowd’s attention. Let us also think about times when we were in difficult situations, even situations of sin, how it was Jesus who took us by the hand and removed us from the side of the road and gave us salvation.

Therefore, a twofold salvation is accomplished. First: the people announced good news to the blind man, but they did not want to have anything to do with him; now Jesus obliges everyone to be aware that proclaiming the good news involves placing the one who had been excluded in the middle of one’s own street. Second: for his part, the blind man would not see, but his faith opened the way of salvation to him, and he finds himself in the midst of all those who came out into the street to see Jesus. Brothers and sisters, the Lord’s passing by is an encounter of mercy that unites everyone around Him, allowing us to see those who need help and consolation. Jesus also passes by in our lives, and when Jesus passes by, and I realize it, it is an invitation to draw near to Him, to be better, to be a better Christian, to follow Jesus.

Jesus turns to the blind man, and asks: “What do you want me to do for you?” (V. 41). These words of Jesus are impressive: The Son of God is now standing before the blind man as a humble servant. He, Jesus — God — says: “What do you want me to do for you? How you want me to serve you?” God becomes the servant of sinful man. The blind man responds to Jesus, no longer calling him “Son of David,” but “Lord,” the title which the Church, from the beginning, has applied to the Risen Jesus. The blind man asks to be able to see again, and his desire is granted, “Receive your sight! Your faith has saved you” (v. 42). He showed his faith by calling out to Jesus, and by absolutely wanting to meet him, and this brought the gift of salvation. Through faith, he can now see and, above all, he feels loved by Jesus. This is why the account ends reporting that the blind man “began to follow him, glorifying God” (v. 43): he becomes a disciple.

From a beggar to a disciple: this is also our path. All of us are beggars, all of us. We always need to be saved. And all of us, every day, have to make this step: from beggars to disciples. And so, the blind man begins walking behind the Lord and becomes part of his community. The one they wanted to silence now bears witness aloud to his encounter with Jesus of Nazareth, and “all the people, when they saw it, gave praise to God” (v. 43).

A second miracle occurs: what happened to the blind man enabled the people finally to see. The same light illumed everyone, gathering them together in the prayer of praise. Thus Jesus pours out his mercy on all those he encounters: he calls them, he enables them to come to him, he gathers them, he heals and enlightens them, creating a new people that celebrates the wonders of his merciful love. Let us allow ourselves to be called by Jesus, too, and let us allow ourselves to be healed by Jesus, forgiven by Jesus, and let us follow behind Jesus praising God. Amen!