A Forgotten Angel Reappears in the Birthplace of Christ 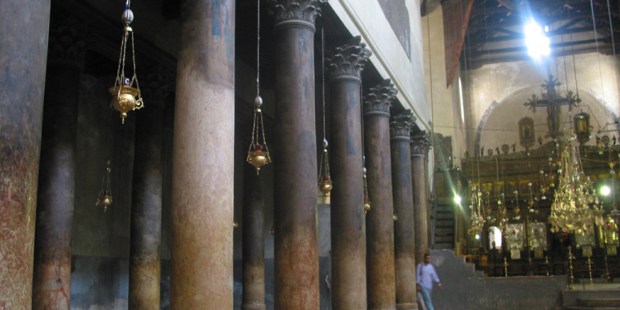 Hiding for centuries under layers of plaster, an 8-foot-tall mosaic of an angel reemerges in the 1700-year-old Church of the Nativity

She was doing research in the Church of the Nativity, the place in which tradition claims Christ was Born when, according to the story published by Anne-Marie O’Connor wrote for NatGeo, she unexpectedly found what turned out to be a long-forgotten 1700-year-old mosaic, hiding under several layers of plaster. That’s how Silvia Starinieri and the team she was working with discovered the face of an eight-foot-tall angel, which (along with six other angels) was supposed to meet the pilgrims visiting of the world’s oldest, most significant churches.

The oblivion this seventh angel went through, according to O’ Connor’s note, is the regrettable result of “centuries of neglect” the basilica has gone through.

Lack of maintenance caused mosaics to gradually disappear under layers of dust, dirt and plaster. Some others were destroyed by moisture and rain, which pours through the roof of the building.

According to the restoration team, only 20% of the original mosaics are still recoverable, including those of the Apostles, a “doubting Thomas” scene, other saints and patriarchs and some images of Jesus, Joseph and a Dolorous Mother Mary. The mosaics are signed, in both Syriac and Latin, by an artist named Basilius, who is thought to be the author of the Melisende Psalter, a manuscript created in the XII century for the Crusader Queen of Jerusalem. Archaeologists know for certain these mosaics were commissioned by the Crusader King of Jerusalem Almaric I and the Byzantine Emperor Manuel Comnenus.

Currently, the Palestinian Authority has urged the patriarchs of the various local churches to work together and support the Italian restoration technicians to improve the conditions of the basilica, which was declared a World Heritage Site in Danger in 2012 by UNESCO.

Note: Pope Francis commended the recent restoration of the angel on Thursday, in his meeting with members of the ROACO (Reunion of Aid Agencies for the Oriental Churches) Assembly.