Why Men Matter and Fathers Figure 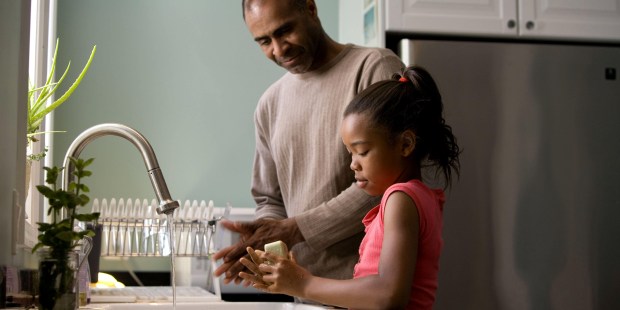 In the daydreams of my girlhood, I was either a business-suited woman clacking spiky heels down a city sidewalk or a plaid-shirted rancher admiring her mountain home from atop a shiny black horse. Occasionally I conjured up a man-figure who resembled Star Trek’s Captain Kirk, but his purpose, being unclear, seemed pretty optional to a girl being molded by the feminist era. I never imagined that I’d grow up to find contentment as a suburban-Midwest wife and mother of two, never mind a horseless cat-lady who wears only modest heels when the occasion requires. Nor did I imagine that my contentment would be so deeply rooted in the man-figure of my husband, whose purpose in my and my children’s lives is decidedly clear and vital, despite the molding attempts of our progressively-confused era.

Like so many in their generation, my Baby-Boomer parents married young and had kids, and divorced soon after. While my father took off in search of life’s meaning, my heartbroken mother and their wedding souvenirs were whisked back to the humble home of my Greatest-Generation grandparents, who simply added three plates to the table and carried on. My grandpa was a physically short but daunting man who honored his Catholic faith, cherished his wife and family, and served his community—all with tough but undeniable love. Not until years into my own marriage did I realize that the qualities of the man I had married so clearly mirrored those of my dear grandpa. Though I can’t say we were especially close, I remember my grandpa advising me that I didn’t need all that make-up; that I should expect boys to respect me; that I shouldn’t believe others who tell me there is no God; and that he saw “great things” in me.

When my mother had healed enough to love again, she eloped with a fellow divorcee. My stepfather, a country-raised factory worker, settled in our lives as the man of the house. He fixed things, drove the car, left for work; he gave shoulder-rides and tickled us to tears. He also suffered from intense mood swings that frequently left the rest of the family cowering and whispering about whether it would be a “good” day or a “bad” day. Though we share, as most families do, a mixed bag of memories, I will never forget how my “Pa” freely chose to raise my older brother and me as his own; how he lifted me up as a child to see the world from the height of his shoulders; and how he taught me to play the guitar with a Hank Williams songbook. I also learned from Pa the value of having a place to take off my boots and call home, as well as a college education—things that he declared “no one can take away from you.”

The father of my oblivious infancy had gone on to serve in Vietnam, earn several college degrees, remarry and start a family. Though ambivalently curious about my mysterious “real dad,” whose photos reflected my longish chin, he was someone I thought of only by first name, as a fictional sort of character in a book I wasn’t quite ready to read. Early in our teens, my brother and I were invited to his home for week’s visit, and I returned without understanding what I or this “real dad” truly wanted or expected from each other. Then, when I was a college freshman, he drove to my campus and took me out for a lunch that proved to mark—as the line goes—“the beginning of a beautiful friendship.”

I am fascinated by the behavioral and other traits I “got from” my biological father despite our separation during those early years: a contemplative nature, a craving for solitude, a love for writing and books. But perhaps the most important thing we share is forgiveness and the certainty that it is never too late in life to erase an error and start anew. Indeed, my dad’s presence in my life has answered questions and healed wounds I might otherwise have neglected—questions and wounds that haunt so many grown children today.

In an age where social and gender roles are decreasingly sacred, I thank our Heavenly Father for the three men who have fathered and loved me to the best of their abilities, as I passed through their lives at various stages of my own. Thanks to my imperfect but perfectly timed fathers, and the father of my own children, I no longer think of men as optional, purposeless figures in my female quest for contentment; I am balanced and whole.