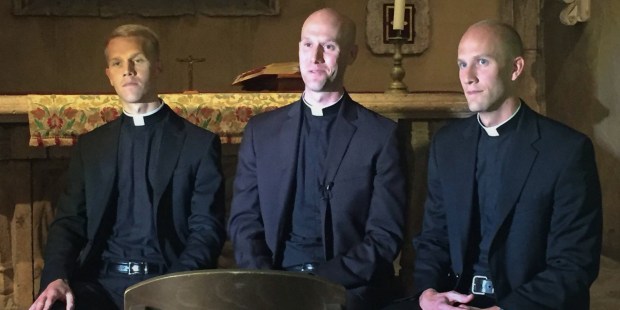 Countless stories of brothers being called to the priesthood point to a solution to the vocations crisis: faith-filled families

Earlier this month Jerry and Bernadette Strand celebrated the priestly ordination of their son, Vincent. However, this was not the first time one of their sons became a priest. Over the past seven years, all three of their sons (Luke, Jacob and Vincent) completed seminary studies and were ordained in service to the Church.

While it may be surprising to hear about three brothers becoming priests, their story is not unique. There are countless stories of brothers responding to the same call of God to the priesthood.

In Michigan, Agnes and Brian Koenigsknecht recently celebrated the ordinations of their identical twin sons for the Diocese of Lansing: Father Todd and Father Gary Koenigsknecht. Currently their younger brother is in the midst of seminary studies.

In Wisconsin, Gary and Amy Oudenhoven were elated when their only two sons were ordained priests for the Diocese of La Crosse: Father Timothy and Father Daniel Oudenhoven. Additionally, the twin sons of James and Marion Sember, Father Joel and Father Ben Sember, were ordained for the Diocese of Green Bay. The Sember twins were the second set of twins ordained in the history of that diocese.

This is only a small sampling of such stories, and the men involved all have a similar motivating factor that helped them follow God’s call: family. Not just supportive parents who practiced their faith, but also the example of a sibling who actively pursued the will of God.

Father Jacob Strand explained to the Catholic Herald how he was inspired by the example of his siblings. “When they began to respond to their vocations, I was always impressed by how fulfilling their lives seemed… My sister has also offered a great example of hope in helping me to trust in St. Paul’s words that ‘love never fails.’”

Father Peter Pilsner related to Catholic New York how his parents didn’t push the priesthood on him or his brothers, but simply practiced the faith. “My parents placed a high value on spiritual life and faith. We prayed together as a family, but they never pushed priesthood on us.”

In addition to a supportive family, the Koenigsknecht twins also point to their small Catholic farming community as a central reason why they are priests. The New York Times explained how, “Faith is the center of life [in their town], those who live here say: Everyone is Catholic, everyone is related and everyone shows up at Mass. The youth groups are active. Nearly all the students attending the prom in the villages begin the festivities by attending a regularly scheduled 4:30 p.m. Mass, dressed in their party attire.”

At a time in the US when many people talk about a “vocation crisis,” the remedy appears to be quite simple: a family dedicated to God, where the children are actively discerning God’s will. There is no “magic formula” or special program that a diocese can implement.

It appears that the key to fostering vocations to the priesthood is by praying as a family and creating an atmosphere of discernment in the local parish community. Parents don’t have to “force” their sons to become priests or constantly nag them about entering seminary. Being open and honest about living a life of faith is the best gift parents can give.

These brother-priests show us that it is the example and support of those closest to you that inspires young men to become priests.