A Catholic priest, Fr. Georges Lemaître, is “Father of the Big Bang Theory” 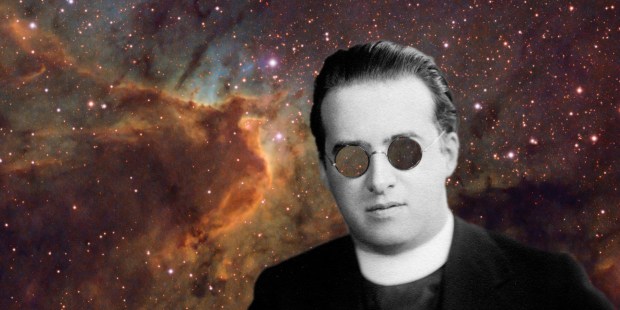 In this edition of the Irish Times, Brian Maye explains how one commentator has observed that Lemaître “showed that religion and science — or at least physics — did not have to be incompatible.”

The claim is not a non-controversial one. In an article published in the Tablet in 2008, John Farrell, author of The Day Without Yesterday: Lemaître, Einstein and the Birth of Modern Cosmology, explains that the reason part of the scientific community rejected Lemaître’s theory was that he was (allegedly) looking for a religious explanation for the beginning of the universe. However, there is also a consensus that this was not the case, since “Lemaître was much too good a scientist to let his religious beliefs influence his scientific research and reasoning.”

After attending the Jesuit College of the Sacred Heart in Coleroi, Lemaître studied civil engineering at the Catholic University of Leuven, but he had to interrupt his studies as the First World War broke out; he became an artillery officer in the Belgian army, receiving the Croix de Guerre for his services. But during the war, he read Henri Poincaré’s Électricité et Optique; it impressed him enough to change his career, and he decided to study physics and math as he returned to the university.

While Lemaître was studying science, he was also called to embrace the priesthood, and it was precisely thanks to his teachers at the seminary that he became acquainted with Einstein’s work. He was ordained a priest in 1923, three years after he got his doctorate in Leuven. That same year he won a scholarship to Cambridge University, where he studied under the famous astrophysicist Sir Arthur Eddington, who introduced him to the latest research in cosmology and astronomy, as Maye explains in his note.

Lemaître moved on to work with the American astronomer Harlow Shapley at Harvard University. While in the US, he completed a second doctorate at the Massachusetts Institute of Technology, and he also worked with Vesto Slipher and Edwin Hubble, two other American astronomers, assembling proofs and data. In 1927, he put forward his ground-breaking idea of an expanding universe (in the process deriving what we call Hubble’s Law two years before Hubble himself did).

Lemaître’s theory was ignored at first, Maye thinks, probably because it was published in a scientific periodical little read outside Belgium. Eddington, his former teacher, did not comment on it and Einstein himself (who was already friends with Lemaître) was reluctant to support this extension of his theory of general relativity. But, as Maye explains, when Hubble published his findings in 1929, Einstein and Eddington were forced to rethink their own ideas.