The beauty beyond the “smells and bells” at Mass 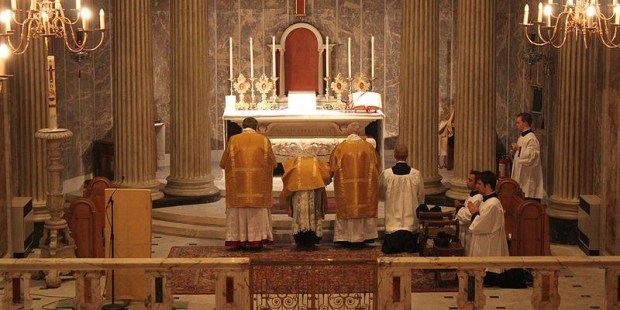 “…Through him the multitude of Angels extols your majesty, and we are united with them in exultant adoration, as with one voice of praise we acclaim…”

The Moses-like figure of the Franciscan priest in beautiful vestments solemnly intoned the prayer as incense wafted through the air, and I was struck by the incredible truth of those words: “we are united with them in exultant adoration…”

My reverie was suddenly interrupted by an urgent whisper: “The bells! The bells!” It was one of the other altar servers reminding me that I was supposed to ring the bells to accompany the Sanctus. It was kind of late, but I rang the bells anyway, although the choir was already singing the second “Hosanna in excelsis.” It was one of the first times I served at the altar, and I had messed it up! It would not be the last time that year that I became entranced by the liturgy and, consequently, failed in my duties as an altar server.

I was attending a small Catholic college with a strong focus on the faith and on making beautiful liturgy a part of our lives. For me, it was a revelation. I had rarely seen this kind of liturgy before – hymns every day with 4-part harmonies, some Gregorian chant on Sundays, incense, all the “smells and bells” – and it gave me a new awareness of the wealth of the Church’s liturgical tradition and the meaning of the Mass.

As every Catholic knows, even within the same diocese the liturgical style and level of parish resources and preparation can vary widely. Sometimes we are uplifted and entranced; other times we might want to close our eyes and try to think about Christ in the Eucharist instead of what is going on around us. Having participated in the liturgy in many different capacities, I can say from experience that even when everything goes according to plan (which it often doesn’t) it is impossible to please all of the people all of the time; there will always be occasions when the liturgy is not celebrated to our taste.

Through them all – the Masses that we find inspiring and the ones that make us uncomfortable – the important thing to remember is the truth hinted at in the text I quoted at the beginning of the article. It is a truth expressed more in detail in the Catechism of the Catholic Church: When we participate in the liturgy, we are not alone as a congregation before the altar. We are joined to the whole Church, Christ the Head and His Body: the saints in heaven and God’s holy people on earth, “a great multitude which no one could number, from every nation, from all tribes, and peoples and tongues.” (Rev 7:9) We are also accompanying the angels, archangels, and all heavenly powers (see the Catechism, 1136-1144). Beyond the visible church and assembly of the faithful, there is a much vaster reality, all centered on the living Christ and on His life and sacrifice, made truly present in the liturgy by the Holy Spirit (see the Catechism, 1097, 1104).

When we pray and sing, we pray and sing with the heavenly hosts to the Lamb upon the throne. When we listen to the lector, we hear the Word of God Himself. Our whole congregation at Mass is like just a single instrument in an immense orchestra of praise and intercession, receiving instruction from the Divine Composer whom we cannot see except through the gestures of the Director, the priest or bishop who presides the assembly.

That is why, on one hand, we should celebrate the liturgy as well and beautifully as possible, and on the other, we cannot let the aesthetics (or lack thereof) of the human side of the celebration get between us and the amazing reality of what is going on.

Lastly, we must always remember that, while the beauty of a Mass can be greatly helped by things like good music and beautiful vestments – and we can argue about what constitutes “good” music and “beautiful” vestments – the most important source of beauty and inspiration at Mass is our true faith and devotion, and our love for one another.

More to read: Liturgy as a True Force for Evangelization