A promise to my broken, abused neighbor 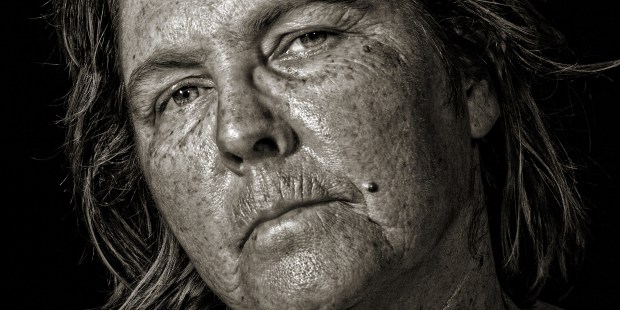 There is nothing I can see in her life that is bright. But God sees more.

The first time I met my neighbor Sue, it was because my one-year-old had just learned to say “dog,” and I couldn’t disappoint him by simply passing by her yapping Pomeranian on our daily walk. Sue was toothless and tiny, with colorless hair, and spoke in rapid-fire spurts of words. She would keep trailing off, leaving unfinished sentences, leaping from idea to idea. Her stories were all details, but not the kind of details that add coherence.

We would stop and speak, not about anything in particular, when we met on the street. She seemed happy to have an audience, though, so I’d make a point to stop and talk if our paths crossed.

A few days ago she pulled up alongside me in her big black station wagon, rolled down the window, and started telling me her life story, right there in the middle of the street. She had recently escaped ten years of an abusive marriage with a man who had beaten her daily, knocked out most of her teeth, locked her in closets and garages, fed her on white bread and ginger ale if he fed her at all, and verbally abused her to the point of annihilating her ego. At different points in the conversation she spoke of her PTSD, untreated advanced cancer, trauma-induced infertility, and massive internal bleeding.

She told me she hadn’t been told when her father was dying, and wasn’t allowed to attend the funeral, but she was able to dash to the window with a bar of soap and write “MY DADDY IS DEAD :( :(” before her husband could stop her.

I woke up five times that night, torn apart inside, because I’ve never encountered such utter poverty, mental and physical and emotional. But I also know that I have nothing to give that could heal or help her. But, my God, how I wish I could, and my God, how I love her, this sister of mine.

More to read: 20 Tips from Padre Pio for Those Who Are Suffering

I was angry with myself that night, and with God too, for the richness of love in my life that I’ve done nothing to deserve, while not 300 feet away lives a Lazarus who would be glad to have the scraps from my table, the peace and comfort that is commonplace to me. Her life looks utterly lonely and joyless, and her burdens seem too big for her broken mind to understand.

Sue reminds me of the nine-month-old child next door, who was born with toxoplasmosis, a parasitic infection that has left her blind, mentally disabled, and wracked with daily seizures. Another neighbor, an elderly woman, who cried when she heard, confided in me that maybe it would be best, and a relief for the baby’s parents, if she didn’t live that long—the girl doesn’t have much of a life to look forward to, after all.

To my shame, I had found myself thinking that about Sue, too. What does she have to look forward to in life? Only more loneliness and confusion and pain, where my future holds the expectation of love and laughter, of children and grandchildren.

But the contents of a life do not determine its value.

Christ’s promise for Sue is very little comfort to me. My faith is nowhere near the point where the bare knowledge of God’s love for the suffering could ease the tightness in my chest that I get from passing by her house. But whether or not I feel comforted by this promise matters not at all. What matters is that it is yet a promise, and that the day will come when Sue’s tears will be wiped away.