The Jim Gaffigan Show brings Catholicism to the masses 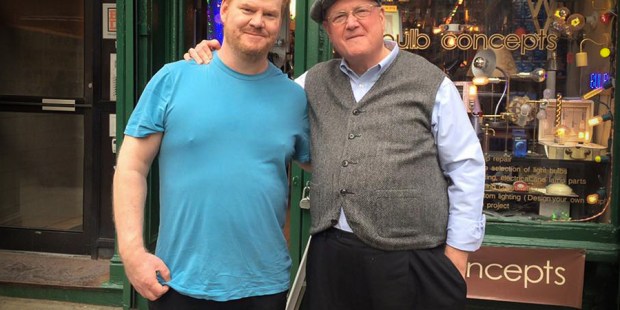 Season 1 of The Jim Gaffigan Show opened with some surprisingly insightful commentary on faith and the way it’s portrayed in the media.

The comedian, known for family-friendly bits about fast food (peppered with a self-criticizing falsetto), is as different from a Louis CK in terms of content as possible. Yet the tone of his autobiographical show was more Louie than sitcom, tinged with a wry realism with flashes of full-on satire. Season 2 has doubled down on this formula, with the first two episodes again tackling faith and social media respectively.

“The Calling” opens on a nervous Gaffigan repeatedly bumping into – and avoiding – his parish priest from Zimbabwe, Father Nicholas, on the streets of New York. The good priest keeps asking the comedian to get involved with church activities. Gaffigan politely demurs, of course, until he finds he has to literally run from the priest, ducking into Yonah Schimmel’s Knish Bakery and McSorley’s Old Ale House to lose him.

Gaffigan raked in a plethora of cameos for the first season, from Chris Rock to Macaulay Culkin (who returns for this episode), and Season 2 is no different. But the first cameo is an unexpected one: the bartender in McSorley’s is none other than Gaffigan’s local archbishop, Timothy Cardinal Dolan. Gaffigan apparently convinced Cardinal Dolan – whose own father was a bartender in St. Louis – to guest star.

If that weren’t startling enough, Gaffigan later learns that Father Nicholas gave up first-rate careers in professional soccer, economics, and modeling to follow a calling from God to serve others as a priest. “For me, it was that I always found such beauty in the Mass,” Father Nicholas explains. “The liturgy. The community in the presence of God.” Gaffigan remembers an embarrassing experience at Mass as an adolescent, but is nevertheless launched onto a quest (guided by Jerry Seinfeld) to discover his own true “calling,” culminating in an awkward conversation at the pearly gates.

More to read: Stephen Colbert Speaks About His Catholic Faith and How He Has Dealt with Suffering

Gaffigan, who co-created the show with his wife Jeannie, continues to be down-to-earth, unserious, and self-effacing about his faith. In the show, Jim’s best friend is a “born-again atheist” who womanizes for sport, and Jeannie’s closest confidant is a snarky gay real estate agent (played by Michael Ian Black) who can’t stand Jim (or his weird hair). But they aren’t consumed with proselytizing or moralizing; the Gaffigans’ own shortcomings – not others’ – are their focus. “No one is finger-wagging at anyone,” Jeannie explained to the National Catholic Register. “With the world we live in, what we do is we live our lives, and we’re open about what we do. We’re happy, and we have a lot of joy in our children and in our faith and in our marriage.”

Still, between Cardinal Dolan, a rock star of a priest, and constant references to Catholic rituals and beliefs, it’s not a stretch to say that The Jim Gaffigan Show feels like the most Catholic 30 minutes of programming outside of EWTN. At the same time, there’s something universal in the show’s comic tension, because despite being resolutely Catholic, the Gaffigans have to navigate a city and an industry that don’t understand them at all.

“We live in the heart of the secular world,” Jeannie also explains, “and we are very open about going to church, and we’re Catholic and [share] that we do all the rituals and the sacraments and that we have faith in our life. We openly admit that we believe in God, and, in our industry, our geographical location, that’s kind of weird. But within that concept, we’ve sort of found that, across the spectrum, a lot of people relate to feeling like a fish out of water in whatever world they’re in.”

All of that sentimentality quickly flies out the window in Episode 2, “The Trial,” which is based on an actual article from Gawker that skewered Gaffigan for a tweet about women’s nails. The episode is full-on satire, imagining the comedian in “social outrage jail” with the likes of Carrot Top, Nickelback, and Gilbert Gottfried, awaiting trial in the “court of public opinion.” There, Gaffigan’s tweet is endlessly and effortlessly spun by fellow celebrities and celebrity gossip columnists, painting Gaffigan as a sexist, homophobic, “dumb, stupid, idiot white guy.” Everything he and his friends say incriminates him and stirs outrage – that is, until Gaffigan wins everyone over with a handful of bromides ripped from song lyrics, and another non-controversy distracts the madding crowd.

More to read: “The Real O’Neals”: A Cautionary Tale Against Mere Cultural Catholicism

Jim Gaffigan may be known for harmless food jokes, but The Jim Gaffigan Show clearly offers hearty food for thought too, applying his self-deprecation to a hyper-connected and hyper-critical world. But the show is still pure Jim Gaffigan. His great comic skill – and why he probably attracts so many different kinds of celebrities – is that he continues to speak to the bumbling, self-pitying oaf inside all of us, the one who tries to act like a responsible adult every morning, but really just wants to sit on the couch in his underwear, eat some pastrami, and take a nap.