Francis and Benedict: The most exclusive brotherhood on the planet 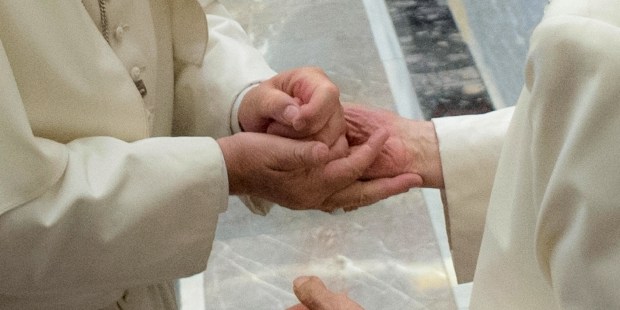 With the Vatican’s official celebration, today, of the 65th Anniversary of Joseph Ratzinger’s ordination to the priesthood (which occurs tomorrow, June 29, on the Feast of St. Peter and St. Paul) we have heard some very beautiful words, and seen for ourselves a bit of the warm regard Pope Francis and the Pope Emeritus have for each other.

They are worth pondering, the words, the visuals, if only because no pope has ever had the benefit of his predecessor’s presence to him. The American presidency may be an exclusive club but the papacy is even more so — much more so, with only 266 of them over the course of 2,000 years — and up to now it has been the loneliest of lonely thrones, with no one living able to understand what it requires; what it gives, and what it takes, and how the Holy Spirit winds around it.

What exists between Francis and Benedict has never existed before: it is a supernatural brotherhood, exclusive and unlike any other on earth, and perhaps only these two men fully appreciate and understand what Benedict set in motion with his resignation in 2013, and what currents the Barque of Peter must ride before this long and mysterious voyage toward restoration comes to its completion.

I think of the two witnesses in Revelation: “two olive trees and the two lampstands…” who fully understand and appreciate each other. And look at their public words, today:

There is undisguised regard, there. And if at 89 years of age, Father Benedict looks frail, note that he speaks without notes, extemporaneously and fully cogent, instructive as ever, as he begins his address with, “Holy Father…”.

And Francis, reading a prepared text, delivers it with authority and conviction, and unmistakable warmth.

There are, not surprisingly, some who look at this moment today, between these two men, and can see only an opportunity to politicize. “Benedict has publicly endorsed Francis!” shout some headlines, while others on social media mope that neither “corrected” the other, and still others wonder whether Francis wrote his own text, and if not could he really mean the words?

What a strange question! As though Ronald Reagan never delivered a speech written by Peggy Noonan, yet meant every word, as demonstrated by his consent to pronounce each one with vigor.

With the humility modeled so simply by The Holy Father, and the Pope Emeritus, let us not permit the pungent but passing illusions of ideology — and the need to cover every event with their stench — to mar and make malodorous a most poignant moment, a glimpse into something none of us can ever truly understand.

And on this eve of the Feast of Saints Peter and Paul, let us ask their prayers for both men, and for this tired rant of a world which we inhabit, in all of our noisy ignorance.