Pope Emeritus Benedict XVI at his finest as he thanks Pope Francis, Cardinals 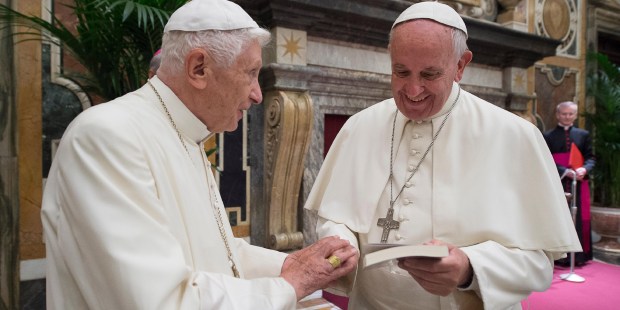 Always the teacher and “friend of Jesus,” Benedict extends his remarks of gratitude to the Eucharistic Lord

VATICAN CITY — Pope emeritus Benedict XVI was at his finest today as he thanked Pope Francis, cardinals, bishops and all those present to celebrate his 65th anniversary of priestly ordination. Here below we publish an English translation of Benedict XVI’s words of thanks and reflection on the Eucharist.

Sixty-five years ago, a brother who was ordained with me decided to write on the holy card recalling his first Mass only one word (except his name and the date) in Greek: “Eucharistomen.” He was convinced that this word in its many dimensions has already said all that can be said in this moment.

“Eucharistomen” says a human thanks, thank you to everyone. Thank you especially, Holy Father! Your goodness, from the first moment of the election, at every moment of my life here, has struck me; it truly carries me, interiorly. More than in the Vatican Gardens with their beauty, your goodness is the place where I live: I feel protected. Thank you also for your word of thanks, for everything. And let us hope that you will be able to go forward with all of us on this way of Divine Mercy, showing the path of Jesus, toward Jesus, toward God.

Thank you as well, Your Eminence [Cardinal Sodano, dean of the College of Cardinals], for your words which have truly touched my heart: Cor ad cor loquitor. You have truly made present both the hour of my priestly ordination and also my visit in 2006 to Friezing, where I relived this. I can only say that, with these words, you have interpreted the essence of my vision of the priesthood, of my work. I am grateful for the bond of friendship which has continued for a long time until now, rooftop to rooftop [referring to the close proximity of their residences]: it is almost present and tangible.

Thank you, Cardinal Müller, for the work you do to present my texts on the priesthood, in which I seek also to help my brother priests to enter ever anew into the mystery in which the Lord gives himself through our hands.

Eucharistomen: at that moment my friend Berger wanted to point not only to the dimension of human thanks, but naturally to the deepest word it conceals, which appears in the Liturgy, in the Scripture, in the words “gratias agens benedixit fregit deditque.” Eucharistomen points us to that reality of thanksgiving, to that new dimension which Christ has given. He has transformed the Cross, suffering, and all the evil in the world into thanksgiving, and thus into blessing. And thus fundamentally he has transubstantiated life and the world and has given us, and gives us each day, the Bread of true life which overcomes the world, thanks to the strength of His love.

In the end, we want to insert ourselves into the Lord’s “thanksgiving,” and thus truly receive the newness of life and help for the transubstantiation of the world: that it may be a world not of death but of life: a world in which love has conquered death.

Thank you all. May the Lord bless us all.