Was Fulton Sheen a prophet? 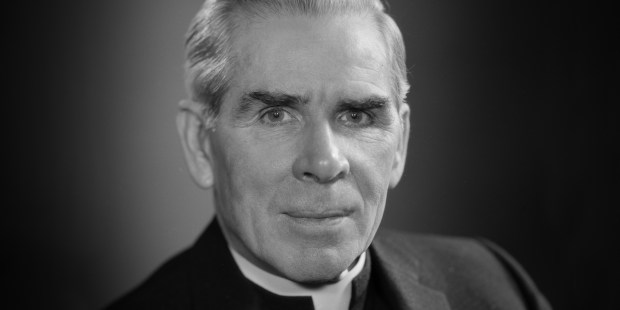 Timeless words for our times

You can usually make a pretty fair guess at a person’s age by looking at him. Is it possible to guess the age of words? Let’s give it a try. When were these words written?

“Thinking … is a difficult task; it is the hardest work a man can do—that is perhaps why so few indulge in it. Thought-saving devices have been invented that rival labor-saving devices in their ingenuity. Fine-sounding phrases like ‘Life is bigger than logic,’ or ‘Progress is the spirit of the age,’ go rattling by us like express trains, carrying the burden of those who are too lazy to think for themselves.”

Would you like a hint? They were written before the advent of Twitter, a facet of social media that may be misused as a thought-saving device. Now try to guess the age of these words:

“America, it is said, is suffering from intolerance. It is not. It is suffering from tolerance: tolerance of right and wrong, truth and error, virtue and evil, Christ and chaos. Our country is not nearly so much overrun with the bigoted as it is overrun with the broad-minded. The man who can make up his mind in an orderly way, as a man might make up his bed, is called a bigot; but a man who cannot make up his mind, any more than he can make up for lost time, is called tolerant and broad-minded.”

Those words appear to be of a very recent vintage, don’t they? They seem to be a contemporary and quite contrary response to the celebration of “tolerance” (and its famous cousin, “diversity”). Words like “tolerance,” “diversity” and “progress” can surely be misused by those who would rather lean on slogans than walk with reason. The two paragraphs above were written at the same time—in the year 1931! Decades before the misuse of social media facilitated lazy thinking, energetic sloganeering and “the dictatorship of relativism,” a generation before the advent of television, these words were penned by then-Father Fulton J. Sheen in his prophetic book, “Old Errors and New Labels.”

I commend that book to you for its wisdom and its eloquence, and also as a source of hope, because we may become discouraged so easily these days. Sheen wrote looking at his times; if he could look now at our times, I suspect he might quote Scripture and say, “What has been will be again, what has been done will be done again; there is nothing new under the sun.” (Ecclesiastes 1:9) Why should that be a source of hope? Because when we are in distress, we may think of our own times as the worst of times, or we may become nostalgic for some “Golden Era” or “Good Old Days” that existed only in our imagination. Sheen I think would use that Scripture to remind us that God does not change, that human nature does not change, but individuals can repent and become sanctified. In every age and place, human persons are called to do good and resist evil, to be faithful to God even as He is faithful to us. And God will never fail to bless our fidelity.

From the Fall of Adam, there was never a time when evil was not working with fury, spite and cunning. Since Eden, always and everywhere has vice warred against virtue, tyranny against justice, lies against truth, lust against purity, blasphemy against sanctity, the grisly against beauty. When we are horrified and repulsed by the darkness we see around us and within us, we should be alarmed—but not surprised. Darkness has always raged against the Light. What is different about our time is perhaps the swiftness and reach of evil. Where can anyone hide from the powers of seduction or destruction? Whether these are the best or worst of times does not matter. What matter is that these times are our times, or, better said, the times in which Divine Providence calls upon us to serve, testify and love. We now have what the saints have always had, namely, the truth given by reason and revelation, the grace of the sacraments, and the fellowship of the saints in this life and in the next. We must do here and now what God has always and everywhere called His people to do, which is to walk the high, hard path of holiness and so enter His heart, which is our only true home.

Let’s resolve today that we will seek courage from the Lord even as we strive to encourage one another. Let’s resolve to live as intercessors, teachers and comrades-in-arms, for here and now it is our turn to struggle against this present darkness (Ephesians 6:12).

When I write next, I will offer a meditation on risk and vulnerability. Until then, let’s keep each other in prayer.