Pope Francis: We arrive at peace by taking small steps together 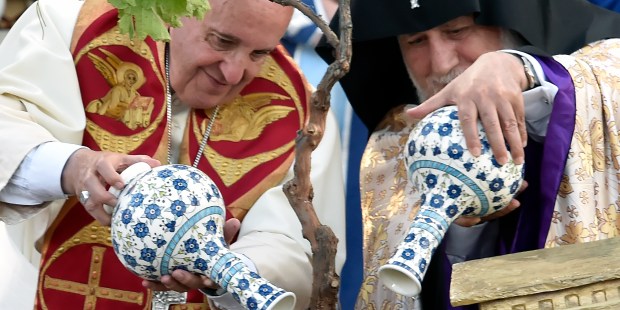 At his final public audience of the summer, Pontiff looks forward to Georgia and Azerbaijan in autumn

VATICAN CITY — Today during his last special Jubilee audience before the summer holidays, Pope Francis reflected on his recent apostolic visit to Armenia, “the first nation to embrace Christianity,” and he looked forward to his visit to Georgia and Azerbaijan this autumn.

“Over the course of a long history, the Armenian people have witnessed to the Christian faith through martyrdom,” the pope told a modest crowd gathered in St. Peter’s Square. “I give thanks to God for this journey, and I am truly grateful to the President of the Armenian Republic, Catholicos Karekin II, the Catholic Patriarch and Bishops, and to the entire Armenian people for having welcomed me as a pilgrim of fraternity and peace.”

Turning to his September 30-October 2 visit to Georgia and Azerbaijan, another two countries in the Caucasus region, Pope Francis explained that he welcomed the invitation for a two-fold reason: “on the one hand,” he said, “to affirm the ancient Christian roots present in those countries — always in a spirit of dialogue with the other religions and cultures — and on the other, to encourage hope and efforts at peace.”

“History teaches us that the path of peace requires a great tenacity and continuous steps, starting with small ones and gradually making them grow by meeting with one another,” the pope continued. “That is why I hope that each and everyone should give its contribution to peace and reconciliation.”

Highlighting the ecumenical thrust of last week’s apostolic visit to Armenia, the Pope then said: “As Christians, we are called to strengthen fraternal communion among ourselves, in order to bear witness to Christ’s Gospel and to be leaven of a more just and peaceful society. That is why the whole visit was shared with the Supreme Patriarch of the Armenian Apostolic Church, who fraternally hosted me for three days in his home.”

Finally, the Pope thanked all of the bishops, priests, men and women religious and all the faithful in Armenia, saying: “May the Virgin Mary, our Mother, help them to remain firm in faith, open to encounter and generous in the works of mercy.”

Pope Francis is only the second pope to visit the Caucasus region. Pope St John Paul II visited Armenia in 2001, Georgia in 1999, and Azerbaijan in 2002.

As of Friday, July 1, all of Pope Francis’ public and private audiences are officially suspended for the summer holidays, the Vatican officially announced earlier this week.