7 books and 7 drinks to sip through summer 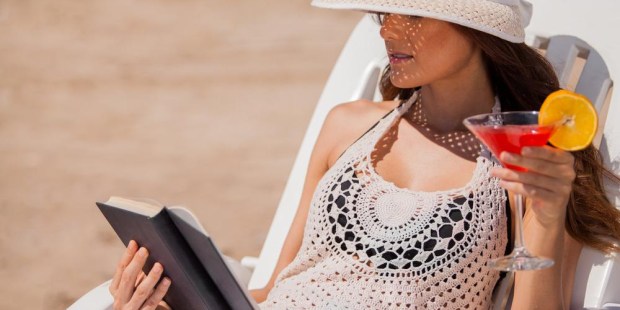 Aleteia staff members share some of their warm weather favorites

“If it could only be like this always – always summer, always alone, the fruit always ripe and Aloysius in a good temper…”

Ah, yes, if only. But while the luscious days may not last, we should savor the moments of R&R we can get this summer, and there’s no better way to do it than with a good book in one hand and a refreshing drink in the other.

If you’re looking for some ideas for your summer vacation, or for a more leisurely weekend over the next couple of months, you may find something in the following list of recommendations by members of Aleteia’s English edition team. Some of the books here are classics; others are new bestsellers— and the beverages paired up with them, alcoholic and non, are perfect matches. So grab a favorite duo, get comfortable, and let the easy living begin…

The Tortoise and the Hare, with a sparkling limeade

If left to my own devices I would happily spend every summer rereading everything by Jane Austen. My husband, thankfully, has hit on a perfect formula for gift-giving: he finds me books by often-obscure female English authors that he thinks might suit my tastes. One I recommend is The Tortoise and the Hare by Elizabeth Jenkins.

First published in 1953, the novel features a love triangle turned on its head in which the other woman is an older, horsey, tweedy sort who insinuates herself in a young couple’s would-be perfect country house-owning family. It’s truly sinister and perfect for the beach—sort of a Kafka meets Jane Austen. And like Austen, the novel gives the reader plenty to chew when it comes to reflecting on the nature of love and friendship.

As for what I like in my other hand when devouring such a book, I’d have to go with a simple and light family favorite—a non-alcoholic drink made with one part limeade, one part lime Perrier, and mint leaves for garnish.

The Great Gatsby, with a Long Island Iced Tea

Nothing says “summer” to me more than swinging on a hammock and re-reading The Great Gatsby. It’s a story of summer—both the season, since it begins in June, near the “longest day of the year,” as Daisy Buchanan notes; and the time of life, the period of exuberance and unpredictability and ripening maturity (or, maybe, immaturity) that afflicts us all before the winds shift and the seasons change and the skies begin to darken.

It helps that the book is short and you can gulp it down over a long weekend—preferably with a Long Island Iced Tea in hand or, if you’re in the mood, a glass of chilled Champagne.

Island of the World, with a glass of your favorite red wine

Ever since elementary school, I’ve been the kind of girl who stays up all night to finish a novel. Yes, I have a problem with self control. Consequently, in my current season of life with a handful of small children, I rarely let myself indulge in a novel, knowing that I will struggle to fulfill any of my personal or professional duties, or get any sleep, until I’ve turned the last page.

Nevertheless, some time ago I picked up Michael O’Brien’s hefty Island of the World. At 833 pages, it may be best timed for your summer schedule. The story opens in the former Yugoslavia as World War II is underway, and traces the life of the main character, Josip Lasta. I believe it’s the most heartbreaking novel I’ve ever read. And yet, how well it succeeds at turning our eyes toward eternity!

Due to the intensity of this book, it’s hard to say what sort of drink would make a good companion. Maybe a simple glass of red wine — to help calm your nerves and emotions, and also because your cup can sit unattended for long minutes (or hours) as you do nothing but focus your eyes on page after page.

Simcha Fisher, “Swimming in the Dark”:

The Way We Live Now, with a Dark & Stormy

I’m plowing through Anthony Trollope’s The Way We Live Now, a chatty and gargantuan Victorian novel of courtship, corruption, dissolution, greed, lovers, and sissy boys. I was enjoying the book for its own sake; but about halfway through, I realized that Augustus Melmotte sounded awfully familiar. He’s a blustering financial giant with a vulgar tastes and murky past, who bulldozes his way to the top of society because he acts so rich that everyone assumes he really is rich—and so they’re willing to lend him even more money. Eventually, his wealth becomes so impressive that he decides to run for public office. . .

Well, let’s have a drink. There’s nothing especially British or Victorian about a Dark and Stormy, but it’s a wonderfully refreshing summer drink, as entertaining and amusing as a Trollope novel. Pour 2 ounces of dark rum over ice, add five ounces of ginger beer (you can use non-alcoholic ginger beer, too, or even ginger ale—I won’t tell anyone!), and squeeze in some fresh lime juice.

Speaker for the Dead, with Yuengling Lager
Sequel to the acclaimed Ender’s Game by Orson Scott Card, this one follows a much older Ender.  He’s aged about 30 years, but he’s been traveling at light speed for so much of it that 3,000 years have passed since the events of Ender’s Game.
In this future, the name of Ender Wiggin is vilified as a perpetrator of war crimes; however, the books he wrote, “The Hive Queen” and “The Hegemon,” under the pseudonym “Speaker for the Dead” have become almost sacred texts in quasi-religious practices in the colonies of Earth. Ender travels from planet to planet as a speaker for the dead (sort of like a priest, but a speaker’s job is to learn about people who die and tell about who they are at their funerals), while all the while searching for a new planet for the bugger queen larva to flourish once more.
There are so many aspects of this story that it would take me hours to write it all, but it’s gripping. I think the first time I read it I couldn’t do anything else until I finished it and the story’s third installment, Xenocide.
As far as drinks are concerned, I thought about suggesting some crazy sci fi-looking drink, but in the end, you’ll need your wits about you to keep up with all the balls that Card floats in the air. So I’d recommend a good session beer—my choice would be Yuengling Lager.

Leaf by Niggle, with a Guinness

While best known for his mammoth trilogy The Lord of the Rings and his children’s fairytale adventure The Hobbit, J.R.R. Tolkien also wrote short stories. Leaf by Niggle is one such story, about a painter who is trying desperately to finish his artwork, but is constantly interrupted by his neighbor. The story is easy to get into and the characters are likable. It’s a humorous story that has multiple levels to it, and one can’t help but see a little bit of Tolkien in the main character.

This little story is best paired with a cold glass of Guinness stout, preferably outside, underneath a beautiful tree.

The Code of the Woosters, with a Gin & Tonic

Just as we look forward to gathering, in summer, with good friends we may not have seen much through busy seasons of work and weather, I always find myself itching in this season to reunite with old friends in book form, whose familiar charms can be amusing while not overtaxing. For that reason my summer reads always include at least one offering by P.G. Wodehouse, whose The Code of the Woosters can still wring laughs and chuckles out of me, even as I admire the plummy farcical phrasings of the writer affectionately known as “Plum.”

Reading Wodehouse in winter calls for whiskey—or cognac if you want to be like that – but in summer, there really is only one cocktail that will do while being with Bertie, and that would be the simple British invention invented to ward off malaria in the most delightful way: the gin and tonic.

As I’m not pretentious and feel no need to redesign, complicate, or improve on a simple classic, let’s get to it. A gin and tonic is easily put together using either a highball glass or a globe-shaped glass or snifter that allows for some aromatic snifting. The first is standard; the second is a nice surprise we fell into one night, when we didn’t feel like emptying the dishwasher.

You have now afforded yourself some protection from both scurvy and malaria, and you’ve had a jolly good time doing it in the company of Wooster and Jeeves, who find themselves once more in the suds, with Bertie being harassed by great aunts who snort at him “like one of those gas explosions which slay six,” and by ghastly girls like Madeline Bassett, who think the stars are God’s daisy chain.

Bertie: “You agree with me that the situation is a lulu?

Jeeves: “Certainly, a somewhat sharp crisis in your affairs would appear to have been precipitated, Sir.”

Yeah, sip your way through that.