Dispatch from Lesbos: Volunteering at a place where life is not here or there 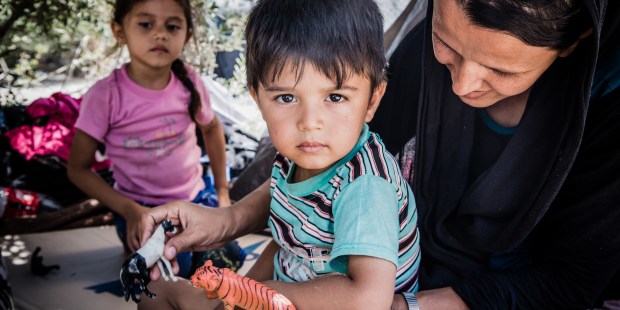 Yesterday I handed out tea with a woman named Amina. If you haven’t had a good cry today, her story should take care of it.

It was my first shift working for the Humanitarian Support Agency, which manages food and clothing distribution at the Kara Tepe camp for refugees (displaced persons or forced migrants are preferable terms) on the Greek island of Lesbos. Even on a not so clear day, the coast of Turkey is clearly visible, under ten miles away. Pope Francis’ visit to the camp inspired me, and a combination of a summer without a major teaching project and a very understanding wife and kids led me to plan a month-long volunteer stint on Lesbos. After one day, many fibers of my being are crying out that this was a terrible idea. But since those very fibers are the ones that act up whenever the cross is present in my life, maybe they can get a well-deserved smackdown as I help these people.

The camp itself is in much better situation, they tell me, from when it had 5,000 residents less than a year ago. It now has around 700. Since the EU agreement with Turkey went into effect, the boats still arrive, but at a much slower pace. Some are blaming that on the fact that the Turkish coast just ran out of rubber boats, since they make a decidedly one way trip, with passengers paying up to $2,000 each for the crossing. I delivered meals yesterday to more than one hut (the forced migrants live in sturdy huts issued by the UN High Commission on Refugees) that housed a family of eight children.

Kara Tepe is a camp that houses people considered at risk, even among an at-risk population. There are many single mothers and some handicapped children. There are Syrians, Afghans, Kurds, Yazidis, Iraqis, even a family or two from the Congo. War and terror have forced them from their homes. They are awaiting interviews in Athens to claim asylum and be officially accepted into a European country. Everyone has a favorite. One little boy told me through an interpreter that he wants to go to Finland and become an astronaut. By the time all this is sorted out, Finland may well have a space program.

My fellow volunteers from HSA hand out meals door to door (it’s the best system to allow for equitable distribution) and many children and teens help out.  The meals are brought from the island’s capital, Mytilini, only a few miles away. After more than a year, procedures at the camp are fairly routine. The UNHCR huts spread like a small village, with a facility that has a bathroom and showers. There is fresh drinking water. And there are children everywhere one looks.

Families also make appointments for clothing distribution. This is a stressful process. They request items and volunteers go to a container and bring out a few examples from them to chose. The clothing donations have previously been sorted by volunteers (that took about 2 hours of my shift). Sometimes they don’t like the style or the color. I had a moment where I said to myself, “Ever hear of beggars can’t be choosers.” But I quickly stopped myself.

I tried to imagine leaving my home and family in Kansas, wandering miles to get to some port like Galveston, and then dropping 15-20 grand on a crossing to Grand Cayman or somewhere (knowing that thousands of people didn’t make it) and kissing the ground of freedom. But freedom would mean being stuck for who-knows-how-long in a camp for forced migrants. I am accustomed to picking out my own clothes, to wandering into a store and getting what I want. Teenagers can be picky. By rejecting certain clothing, these people are trying to maintain a culture, a lifestyle, a measure of personal dignity and freedom.

Since it is still the month of Ramadan, at lunchtime, we delivered fewer meals since many were fasting. OK, that blew me away. I tend to rejoice in every loophole and dispensation (Lenten Friday? But it’s St. Patrick’s Day and my bishop said we can eat meat!). To be in a situation like theirs and still practice a tough commitment like the Ramadan fast made me feel a bit wimpy, just saying.

They all said thank you for the food, though. And when they got their tea from Amina, one woman said something that made her laugh. I had to turn away with a tear in my eye, since I am sure she doesn’t laugh a lot lately.