Pope Francis to visit “the most sacred place of Franciscan spirituality” 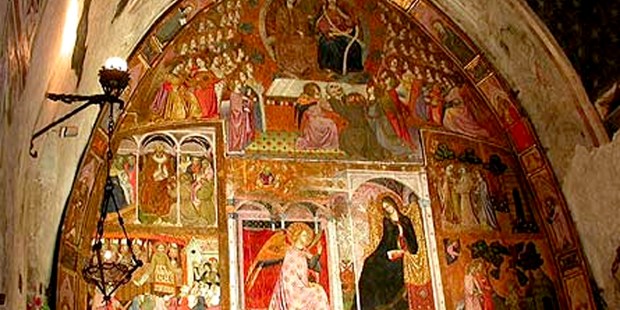 The Holy Father will make a pilgrimage to the Porziuncula to commemorate the pardon St. Francis obtained for repentant sinners

Click here to launch the slideshow
The Franciscans and Bishop Domenico Sorrentino of Assisi announced today, July 4, that Pope Francis will visit the Umbrian village on Thursday August 4. During the afternoon visit to the Porziuncola inside the Basilica of St Mary of the Angels, the Pope will officially mark the 8th centenary of the event known as the Pardon of Assisi. According to Vatican Radio, the papal trip to Assisi is being described as a private pilgrimage to the tiny chapel which St. Francis built and where he founded the Franciscan order at the beginning of the 13th century.

The following is a story I did about the Porziuncula and the Pardon after a visit to Assisi.

The Indulgence of Porziuncula: “The most sacred place of Franciscan spirituality”

The story of the “Pardon of Assisi” and the Indulgence of Porziuncula is a wonderful story, all the more so if you have a great love for the saint of Assisi or bear his name – Francis (my middle name is Frances).

That Porziuncula website tells us that a small abandoned chapel, situated in an area known in Latin as “Portiuncula” – which means “small piece of land” – was given by Benedictine monks to St. Francis who, having promised the abbot to make it the mother house of his new order, promptly restored it with his own hands.

It was here that he came to understand his vocation clearly and here he founded the Order of the Friars Minor in 1209, entrusting it to the protection of the Virgin Mother of Christ, to whom the little church is dedicated.

One night in 1216, while Francis was immersed in prayer, a radiant light spread through the little church and he saw above the altar Christ and his Holy Mother, surrounded by a multitude of Angels. They asked him what he wanted for the salvation of souls. Francis’ reply was immediate; “I ask that all those persons who have repented and confessed their sins who will come to this church, may obtain a full and generous pardon, and a complete remission of all their faults.”

“What you ask is very for is a very great favor,” the Lord said to him, “but of greater things you are worthy and greater things you shall have. I accept your prayer therefore on condition that you ask my vicar on earth, on my behalf, for this indulgence.” Francis immediately presented himself before Pope Honorius III who listened attentively to him and gave his approval. To the question “Francis, for how many years do you wish this indulgence?” the saint replied, “Holy Father, I am not asking for years but for souls.” On August 2, 1216, together with the bishops of Umbria, he happily announced to the people gathered at the Porziuncola, “My brothers and sisters, I want to send all of you to Paradise.”

The great basilica of Santa Maria degli Angeli (Saint Mary of the Angels) was constructed between 1569 and 1679 in accordance with the wishes of Pope St. Pius V, (1566-72), in order to contain the chapels of the Porziuncola, the original cell where Francis lived and died, the Rose Garden, and the Passing, as well as other places sacred to the memory of St. Francis, and to welcome the visitors from all around the world who came to visit them.

The powerful earthquakes that struck Umbria in 1832 caused serious damage to the basilica. At the end of a long and complex restoration, directed by the architect, Luigi Poletti, it was reopened for religious celebrations on September 8, 1840. The façade was radically restructured by Cesare Bazzani, with the intention of conferring a majesty worthy of the importance of the Shrine. It was officially inaugurated on June 8, 1930 and an imposing gilded bronze statue of the Virgin Mary was placed on top of it.

Upon entering the Porziuncola, one is immediately struck by the light and the colors of the Altar Screen of Prete Ilario da Viterbo (1393). The story of the Indulgence of Assisi is recounted in a series of five paintings: Francis throws himself amongst the thorns in order to overcome temptation; he is accompanied by two angels while going towards the Porziuncula;  he contemplates the apparition of Jesus and the Virgin and asks for the plenary indulgence; he asks for confirmation of this from the Pope and finally declares to all the great gift received from Christ and the Church.

Millions of souls have crossed the threshold of the Porziuncula chapel’s “door to eternal life” and have knelt here in order to rediscover the peace and forgiveness of the great Indulgence. On the threshold of this little church are written the words “hic locus sanctus est,” this is a holy place, because God descended here to meet Francis and whoever enters here in faith.

The Chapel of the Passing is a simple stone building that served as the infirmary for the first friary. St. Francis passed the last days of his life here, and being placed naked on the bare earth, died here on the evening of October 3, 1226, after having composed the final verses of his Canticle of the Creatures:

“Praised be you my Lord, for our Sister Bodily Death from whom no living man can escape: woe to those who die in mortal sin; blessed are those whom she finds doing Your Most Holy Will, because the Second Death will do them no harm.”

The Rose garden area of the Sanctuary is what remains of the old forest where the friars lived. Here the rose garden is situated among whose thorns Francis rolled himself one night in order to overcome doubt and temptation. According to a tradition, already attested to in the thirteenth century, the briars on contact with the Poor Man’s body turned into roses without thorns, and this is the origin of the “Rosa Canina Assisiensis,” which continues to flower only at the Porziuncola.

TO OBTAIN THE INDULGENCE:

1) Visit the Sanctuary and say an Our Father and the Creed; 2) Make a sacramental Confession and receive Communion at Mass; 3) Say a prayer for the intentions of the Pope.

This article was first published at Joan’s Rome and is reprinted here with kind permission.