Republicans and Democrats in love 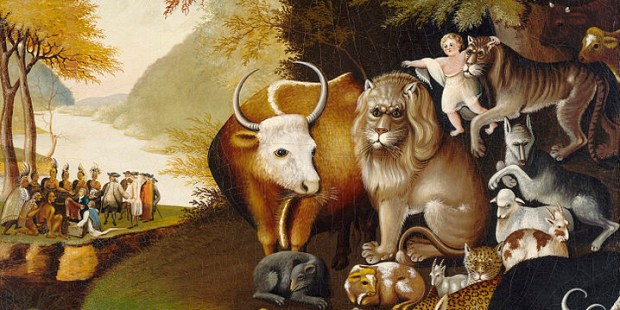 If you think “not talking about it” can make for a healthy marriage, think again

Last week I received an email from a reader asking my opinion on their relationship with a person who held a dramatically different political position. The reader was staunchly conservative and pro-life and their significant other was liberal and pro-choice. Politics aside, the relationship seemed OK. They only quarreled when they watched the news together. The reader had some concerns and wanted to know if I thought it was possible for a Democrat and a Republican to find a happily ever after.

They’ve asked me not to publish their letter but have given me permission to discuss the issue and publish my reply.

So can a liberal and a conservative find harmony?

When I was a little girl my mother had a picture of Edward Hicks’s Peaceable Kingdom hanging in our dining room. I hated that creepy picture. I was such an intolerant child.

Can couples with differing political views have successful relationships?

Sure. To a degree.

That degree being whether those political views are a reflection of some deeply held moral belief. In which case, perhaps not — perhaps not, especially if your partner’s morals are completely contradictory to your own.

An example would be your views on the sanctity of life. Personally I don’t see how those particular differences could be reconciled because abortion is so depraved and evil. I would have a great deal of trouble respecting and growing in affection for a person who supported and defended abortion. And because I’ve always been, by nature, sort of fight-y, it would be almost impossible for me not to bring up my opinions and try and change the other person’s mind. That’s what happens when you have convictions.

So when I read that your relationship is otherwise OK as long as you two don’t start talking about politics I have to wonder if you two only like each other in a superficial way. Only you can know if you purposefully avoid conversations that might be unpleasant and lead to conflict.

Of course couples argue, and no two people are exactly the same, and there will always be things couples disagree on, even when their moral beliefs align. Liberals and conservative can be in relationships — witness the unlikely duo of James Carville and Mary Matalin, and their long, successful marriage — but it requires a strong dose of healthy mutual respect. If you’re unable to have meaningful conversations on your core values and beliefs without fighting, things may not be that healthy.

You may be attracted to each other and have a great deal in common on the surface, but you both might be too fundamentally different for anything serious to develop. If you don’t talk about these things, you may never know until it’s too late.

You need to sit down and discuss just how conservative or liberal you each are, and how committed you are to your position. What appeals to one within the Democratic platform, or the Republican? If one of you is in support of same-sex marriage, for instance, that person may have a fundamentally flawed, or ill-informed, view on the sacrament that is completely incompatible with the other’s. Conversely, if one is convinced that the GOP has a better idea about immigration than the USCCB, that’s something to talk about. If one of you believes that religious freedom doesn’t preclude forcing nuns to go against their own consciences, you both need to know that.

My guess is as good as yours, since you two never talk about it.

Political differences are more than just preferences and generic likes/dislikes; they can represent the foundations of our beliefs. Just remember that.