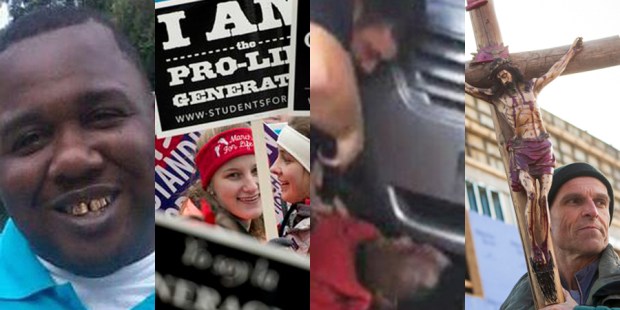 Senseless violent deaths are equal, whether in the womb or on the pavement

This morning I woke up to the news of yet another man being shot and killed by police officers. So many things about this story break my heart and hit close to home. I know what it is to fear the police when you get pulled over. I am a Hispanic female who drives a beat up car, I get pulled over regularly in the suburbs and I am always scared. I’m not scared that cops will shoot me per se, but I do know that the moment the lights come on, they are in control and have power over me.

My husband does not have this anxiety. He’s white and has been pulled over with guns in his truck. He keeps his hands on the steering wheel until he feels the officer understands what firearms are in the truck and where and it’s safe for him to reach for whatever the officer has asked for. He is confident that he can do that. I am not. There is a vast difference between how I am treated and how my husband is treated when we are pulled over. I see it, he doesn’t. He is allowed to speak and is heard. He isn’t seen as a threat from the get go, the way that I am.

There is no way for me to explain the fear that paralyzes me when I am pulled over and am trying my best to be polite, respectful, do what I am told and not end up face down on the ground with a gun drawn on me. And I’m not brown, not black. I’ve been in jail; I know that black people have it so much harder than I can ever even understand.  I have seen black friends put face down on a hot summer pavement to be searched by police without being able to speak, just take orders and hope that they don’t move the wrong way.

As Catholics, we have to realize that this is a life issue.

It’s a true pro-life issue, not to be relegated to a peripheral status — like a pro-life also-ran — as though “as long abortion is legal” the senseless deaths of black people by jumpy cops is a life issue less urgent.

When a community of our neighbors is mourning the death of yet another one (or two) of their sons, fathers, cousins, and brothers it is time to stand with them in their pain. It is not the time for us to use their deaths as a platform to bring up the lives lost from abortion. Violent death is equal, whether it takes place in the womb, or on the hot pavement; it’s not either/or — it’s both/and.

Yes, abortion leads to the disregard of human of life; we know this,  theologically and philosophically. It’s precisely because we do that we can’t shuffle the deaths of Alton Sterling and Philando Castile off to the side, as though they are less of a social calamity, because perhaps their lives weren’t as pristine and faultless as the life in the womb.

You know the tragedy of fetuses being torn apart in the womb based on the number of a person’s chromosomes? These deaths are a part of the tragedy of lives lost based on the color of a person’s skin. We can and should stand up and say that this too is an unjust loss of life. In fact, we have duty to do just that. Putting every single story through the “yeah, but abortion” lens diminishes the credibility of a the pro-life movement; it sounds dismissive and inconsistent. It is a failure of being witness to the sacredness of every life.

I am heartbroken for the black community, a community that took me in when I was a lost child and treated me like one of their own. People should not fear the people who are supposed to protect them. And police officers should not be taught to fear us either. I admit it, I have no idea what it is like to be an officer in the hood, I know what it is like to live there though, so I know it’s not a walk in the park, but there has to be another way.

Like others, I am tired of writing “prayers” in response to the evil consuming this world. Prayer in its face is essential, but we are also called to fight against that evil, and for the sanctity of every human life. God expects us to do that.