How can we make the Mass “more faithful to the wishes of the Council Fathers”? 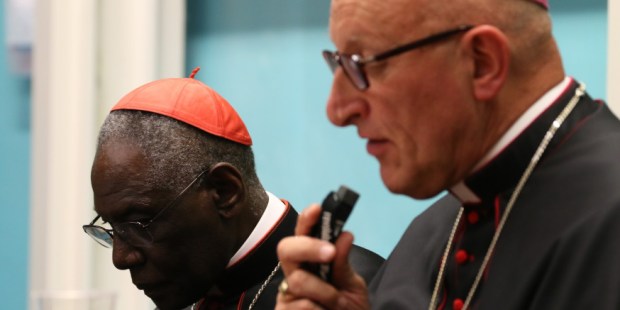 At Sacra Liturgia, Bishop Rey talks to Aleteia about the pope’s charge to Cardinal Sarah to consider prudent “reforms of the reform”

Bishop, this is the third international  Sacra Liturgia conference. Can you tell our readers what it is about?
Sacred Liturgy (Sacra Liturgia) is a conference which takes place from July 5 to 8, in which several bishops, priests and laity — field pastors, academics, altar servers, musicians , etc — [gather] to work on the importance of training and celebration for the Church today. For several days all can meet, join and compare ideas and theory with practical experiences. It is a time of prayer, celebration and reflection.
What is the nature and spirit of your approach?
Our approach is in fidelity to the Magisterium of the last popes. John Paul II wrote in Ecclesia de Eucharistia that “the Eucharist, the sacrament par excellence of the Paschal Mystery, has its place at the center of ecclesial life” (n. 3). In the interview book Light of the World, Benedict XVI indicated that “the Church is visible to men by many means, […] but the place where they feel most often as a Church is the liturgy” [1]. The Second Vatican Council states that “the liturgy is the summit toward which the activity of the Church, and at the same time the source from which all her power flows” (Sacrosanctum Concilium, n. 10).

Pope Francis wants to continue this movement. In Evangelii Gaudium, he wrote that “the Church evangelizes and is evangelized itself by the beauty of the liturgy, which is also celebrating the evangelizing activity and source of renewed impulse to give themselves” (n. 25). Our approach is to communion: we wish to celebrate the diversity of rites or legitimate uses within the Church; the closing Mass, for example, uses Anglican prayers approved by the Roman Curia.

Cardinal Robert Sarah, Prefect of the Congregation for Divine Worship and the Discipline of the Sacraments, “Minister of liturgy” of the Pope, gave the opening speech. What insights did you glean from them?
The presence of Cardinal Sarah is an honor and a form of encouragement from the Holy See. It is a way to orient our work into the directions inspired by the Holy Father, to the Church.

In his opening address, Cardinal Sarah has made clear a goal of conforming our liturgical celebrations more faithfully to the wishes of the Council Fathers. In the area of liturgy, Sacrosanctum Concilium remains deeply relevant. In rereading, one finds for example the path that lies ahead for greater interior participation of the faithful.

From its analysis of the liturgical reform and Sacrosanctum Concilium, Cardinal Sarah said that Pope Francis had encouraged him to think about a “reform of the reform,” that is to say, to see if can refine the last reform.

This certainly arouses much discussion. Does the re-adoption of ad orientem celebration which Cardinal Sarah announced amount to the priest simply “turning his back to the people”?
Cardinal Sarah insists that there is a common direction, eastward, to strengthen the unity of the congregation, the priest with the faithful; it is not meant to divide them [but to unify]! Clearly, there are subjective aspects, and personalities to consider, but what is important is not the charisma of a priest or leader: it is God who must be at the center! Cardinal Ratzinger spoke of the “God-centered character of the liturgy”. [2] Looking to the East, or at least towards the apse, as a gesture of [common] humility.

Personally, I do not see it as a desire to return to the forms of the past, but I rediscover with new eyes a strong, meaningful image: Cardinal Ratzinger wrote that “The orientation of the prayer for priests and faithful [ …] was conceived as a gaze on the Lord, the true sun.” [3]

We must act with caution, as Cardinal Sarah said. We can celebrate ad orientem, where and when it is appropriate and can be included. This is not meant to begin a revolution. For my part, I will celebrate ad orientem in the fourth Sunday of Advent, to encourage priests and faithful of my diocese to reflect on the meaning of the liturgy and in the place of Christ in it.

Has Cardinal Sarah given other concrete ideas for reform of the liturgy that the Pope Francis asked him to lead?
He stressed the importance of song. As St. Augustine said, singing is praying twice. The singing informs the prayer that we address to God. Music is also a way to express what lies in the depths of our soul. Section 116 of Sacrosanctum Concilium the Council wrote that “Gregorian chant [is especially] suited to the Roman liturgy: therefore, other things being equal, it should be given pride of place in liturgical services.”

An issue that is dear to my heart is that the spirit of worship should be improved within our celebrations. This requires moments of silence [which are] conducive to meditation, but also attitudes like kneeling (if health permits) for the consecration or communion.

Finally, Cardinal Sarah insisted on holding priests responsible for the tone of the Mass — to make a priority of what attitude prevails in the liturgy; turn off the cell phone; encourage silence; do not be casual in worship, especially at large gatherings.

But there is also the beauty of the vestiture [and articles for the altar]. The council called for a noble simplicity, but not a complete disregard! We priests can translate our faith and joy by wearing beautiful and worthy robes for celebration. Think of the Curé of Ars [Saint John Vianney], who lived on nothing and spent his small budget to buy liturgical elements that were worthy of the worship of God.

These tracks have only one goal, in the words of Cardinal Ratzinger, move towards “a worthy way of celebrating the liturgy, both in its external shape in the interior dispositions she calls” [4].