Shame vs. guilt: A guide for the scrupulous 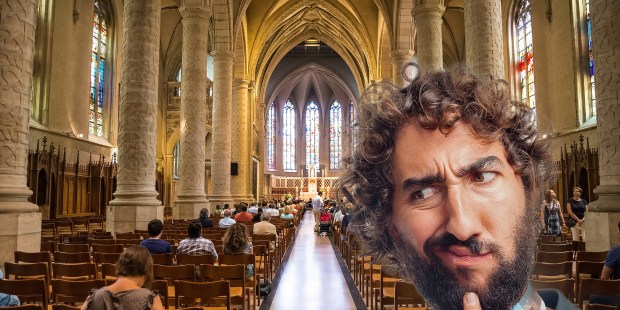 If you tend towards self-criticism, it’s helpful to understand the difference

I love the little practice of making the sign of the cross when I pass a church. It’s a simple and beautiful way to greet the Lord, and to re-orient my day towards Him and His peace. But not a week after forming the habit, I found myself tangled up in knots. I could have seen this coming; I know perfectly well that my temperament is strongly inclined to be scrupulous.

“Okay, look, a church is coming up. But it’s Coptic. Do they even have the true presence? I’d better cross myself, just in case. But what if Christ isn’t there?” And, “Oops, I crossed myself too early. I wasn’t quite in front of the building. I’d better do it again. Better safe than sorry.” And, “Oh, rats, there’s a church, but I’m steering with my right hand, and I have this coffee in my left, but I shouldn’t cross myself left-handed, but I can’t reach my cup holder. There’s no way I can do this right.” Please don’t waste valuable virtual ink in the combox setting me straight; I really do know better. But knowing better doesn’t help.

Reading Brene Brown’s book Daring Greatly, I recently learned a distinction that cut through a lot of the nonsense in my head, and clarified a great deal. It’s the difference between shame and guilt, and it’s proven a useful weapon.

Guilt says, “You did a bad thing. You should have done this, not that.” It motivates change, and although it stings a bit, it leads toward humility, and it’s a prerequisite for repentance. But shame is nothing like guilt. Shame says, “You are bad.” Shame wants to convince us that the wrongness goes deeper than the action—it goes all the way down to the heart of who and what we are. It doesn’t motivate change, since how can you change your nature? It doesn’t facilitate right action, because the idea of fixing yourself when you’re bad through and through is daunting enough to take you straight down the steep slide of despair.

A scrupulous thought isn’t founded in reason, so it can’t be banished by logic. But refusing to address the scruple just makes it louder, so that’s not the way to go either. This is where the shame-guilt distinction comes in.

From the outside, it looks like scruples are using feelings of guilt to fuel them. After all, all the self-criticisms in my own little example had to do with whether my action was right or not. Had I crossed myself correctly, at the right time, in the right way, and with the right intention? But guilt is just its disguise—shame is what’s actually at work.

Guilt works within the jurisdiction of reason, because one needs to use reason in order to say “That action was wrong.” Reason allows us to compare the action to the moral law, and if the action is lacking, or opposed to morality, it opens the door for guilt. But scruples and reason have nothing to do with each other. Where it looked as though I was berating myself for my wrong action, I was really struggling with the idea that because I did not do whatever action to perfection, I am depraved—wrong not just in my choices, but in my being.

Learning to see my fear as founded in shame, rather than guilt, helps me not expend energy trying to out-logic a scrupulous thought. It has helped me not panic when I worry that I’m doing it wrong. If I have something concrete to repent of, I do, and if I have only paralyzing anxiety, I stop and remind myself that God loves me, that I’m not a lost cause, and I move on with my day. Guilt, I’m glad to have, but shame has no place in somebody so tremendously loved by God.