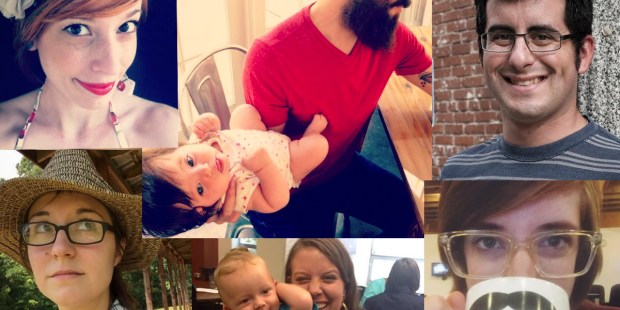 Hipsters are well known for embracing countercultural ideas and beliefs simply because it’s ironic or cool to do so. A Catholic Hipster, however, is one who fully embraces his or her Catholic faith and works hard to share the Good News about Jesus and His Church, which is about as countercultural as you can get nowadays.

These are the folks who are praying their Morning Offering while blending up an organic kale smoothie, stopping by Eucharistic Adoration on the way to the Farmer’s Market, and thumbing through their Breviary while sipping a pint of the freshest local microbrew.

Many Catholic Hipsters have found social media a great tool for spreading Catholic Cool as far and wide as possible, and this is the definitive list of those doing it well:

1. Haley Stewart (@HaleyCarrots): This mother of three, speaker, podcaster, and creator of CarrotsForMichaelmas.com says her favorite hobby is “taking selfies with baby goats.” Haley and her family left urban life to settle down on a farm in Waco, Texas, and her Twitter feed is a splendid smattering of farm photos, fangirling over Jane Austen, and poignant thoughts on life as a Millennial Catholic living in a secular world. She recently expressed her frustration with the Supreme Court’s ruling on abortion with a tweet that put its finger on the sad reality we live in, “So the government has to ‘protect’ me from buying the raw milk I want but won’t regulate reasonable safety standards for abortion clinics?”

2. Daniel Stewart (@Daniel_Bearman): The other half of the Stewart family, affectionately known as “The Catholic Hipster Power Couple,” Daniel Stewart has been sharing his life on the farm through both Twitter and Instagram, and it’s been a thing of beauty. His profile, “Whisky, Okra, St. Flannery,” says it all, and his tweets like “I found a very large but also very dead snake in the outhouse today. OK, bye” give a great glimpse into Catholic Farm Life. He’s also a nerd like you, which helps you to feel less awkward: “I’m the kid who complained that a lot of the dinosaurs in Jurassic Park were actually from the Cretaceous period.”

3. Emily Edmonson (@nosdnomde): Affectionately known as “Texas Red,” Emily is another farm-focused Catholic Hipster, and I promise I’ll move away from the farm as the list progresses. Emily is a theologian, Notre Dame and Baylor alumna, self-proclaimed hick, and feminist, and she’s also downright hilarious. She recently posted one of my favorite jokes, “What do you call people who use NFP? Parents.” She also recently invited feedback in a poll: “I’m almost done with my first day of work at my new job. How do I cope when I get off?” with the choices being beer, bourbon, or both.

4. Steven Lewis (@SteveMissionary): Steven Lewis is a Catholic YouTuber (yes, that’s a thing) and posts video blogs (or “vlogs” as the kids say) at Patheos. Where else in social media will you be asked questions like, “OK. Who is your favorite Catholic large-scale sculptor? Preferably abstract.” In addition to sharing his hilarious thoughts about being a young Catholic in the Bay Area, Steven also enjoys pushing his obsession with Broadway musicals and opera on the rest of us, including a recent tweet about his trip to the opera with his mother: “Don Carlo might have the best bro-duet in all of opera.”

5. Mary Rezac (@MaryRezac): A journalist for both Catholic News Agency and EWTN, Mary consistently pens some of the best articles either of those sources has to offer. She also frequently pops up on CNA’s Snapchat, which is far and away the best use of Snapchat out there. From her serious thoughts like “I can’t rail against assisted suicide enough. It’s a horrible practice that should not be enshrined in law” to her hilarious quick takes like “We are an Easter people and national donut day is our song,” Mary Rezac has you covered.

6. Melissa Keating (@AndCompanions): In my opinion, Melissa Keating has the most creative Twitter handle in all of Catholic social media. Back in October, she clarified her handle: “It’s crazy to think how many people currently alive will be saints. Meanwhile I’m just praying to make it into one of their ‘and companions.’” She’s bringing her journalist eye to current events with tweets like, “Donald Trump is practically a presidential nominee and Britain still made the craziest political choice of the year.” And she gives us a glimpse into the life of those living under the shadow of the Rockies with tweets like, “Did y’all know that Denver claims to have ‘Colorado-style pizza’? You literally just dip the crust in honey. That’s it.”

I would humbly suggest you pour yourself a nice cup of French-pressed coffee, click Follow on all these folks, and enjoy all the Catholic Cool coming your way.