The Secret Life of Pets: Pssst — they have abandonment issues 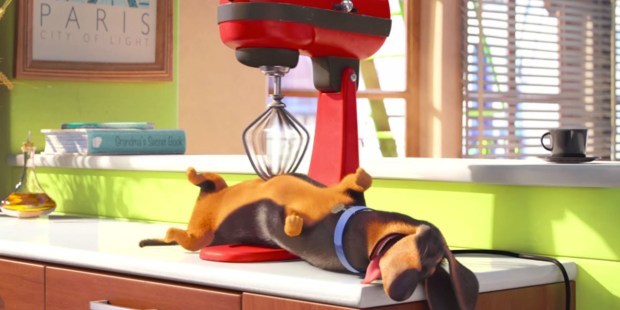 Given the caliber of talent on hand, it’s a shame the film doesn’t strive for more

As the story goes, St. Francis of Assisi was relaxing one day when a fellow monk brought to him a rabbit that had been caught in a trap. Taking it in his lap, Francis gently questioned ‘Brother Hare’ as to why he had let himself be snared so easily. After advising the rabbit to be more careful in the future, Francis set the bunny down so it could return to the woods. Instead, unwilling to leave the holy man’s presence, the rabbit immediately hopped back into Francis’ lap. This happened a few more times until, finally, Francis asked some of the brothers to take the animal deep into the woods and release it. They did so and the rabbit at last went on its merry way, and that was that. Had this event taken place in the world of The Secret Life of Pets, however, the rabbit would have then gone on to declare war on mankind and raise an army of animals dedicated to raining destruction on all human beings.

But I’m jumping ahead. The Secret Life of Pets begins calmly enough by introducing us to Max (Louis C.K.), a small terrier who lives in a New York apartment with his beloved human, Katie (Ellie Kemper). Max spends his evenings in bliss enjoying Katie’s company and his days in agonized anticipation waiting for her to return from work. To pass the time, he hangs out with the other pets in the building. Apparently our furry friends get up to quite a bit when we’re not home, everything from raiding the fridge to playing video games to flipping the channel over to their favorite telenovelas. Max still doesn’t like the waiting, but overall, he thinks he’s got the perfect life.

Then Katie brings home Duke (Eric Stonestreet), a big slobbering mutt who has more in common with Bigfoot than he does with other canines. Faster than you can say Toy Story, Max begins to conceive of ways to get rid of his perceived rival for Katie’s affections. This leads, naturally, to the two of them getting lost in the Big Apple and having a number of adventures as they try to find a way back to their owner. Meanwhile, faster than you can say Toy Story 2, all of Max’s pals from the apartment complex organize a search party and head out to rescue their missing friends.

And that’s where the bunny comes in. Snowball (Kevin Hart) is a former magician’s rabbit who was abandoned by his owner. Consumed with hate from this betrayal, Snowball has organized a vast legion of discarded pets who now live in the sewers and plot revolution against their former masters. After pretending to be ‘owner-killers’ so Snowball will help them escape from animal control, Max and Duke are conscripted into the rabbit’s army. Unfortunately, the initiation rite ends in tragedy and Max and Duke must flee for their lives with the sociopathic Snowball in hot pursuit.

That all probably sounds a lot weirder reading it than it actually plays out on screen. It points out, though, that if you go into The Secret Life of Pets thinking it’s just going to be about a bunch of cuddly animals doing cute things while their owners aren’t home, you’re in for a shock after the first fifteen minutes. Much like Illumination’s last picture, Minions, The Secret Life of Pets quickly establishes its characters and then gets right to the hyperactive action scenes. That’s fine; not every animated feature is required to have the emotional or intellectual heft of a Disney/Pixar film, but with such a talented voice cast to work with (Albert Brooks and Dana Carvey show up as well), it’s a bit of a shame the movie doesn’t strive for a little more charm or depth than it does.

Still, at a brief 90-minute running time, The Secret Life of Pets is hardly a chore to sit through. It has some decent laughs and there’s fun in recognizing some of your own pet’s foibles in the characters. And while there’s no big moral lesson imparted in the film, save perhaps for don’t pretend to be a murderer because that will only make things worse in the end, you can always use the movie as a springboard to talk to your kids about other stories. For instance, there’s always that one about St. Francis and the rabbit who didn’t become a psychotic.