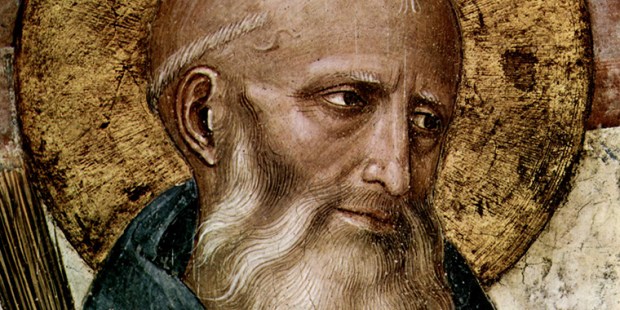 Listen carefully, my son, to the master’s instructions, and attend to them with the ear of your heart.
Prologue to the Holy Rule of St. Benedict

July 11 is the feast day of Saint Benedict, a man who left the city and the promises of Roman nobility in search of a life of solitude. For three years he lived in a cave as a hermit, but when a local abbot died, the community begged him to come and help them.

However, while they revered Benedict for his sanctity, the monks could not agree on anything and tried to poison him with a drink. The saint famously said a blessing over the cup and foiled the insidious plan. Numerous miracles were attributed to him during his lifetime and his wisdom was sought after by all.

Saint Benedict would go on to found 13 monasteries and spent the remainder of his life creating a plan or “rule” for an ideal monastery. This would become known as the “Rule of Saint Benedict” and continues to be a driving force behind religious life — and even for some principled corporations and businesses — in our own day.

To help us appreciate the man Pope Benedict XVI chose to emulate, here are ten inspiring quotes from the “Father of Western Monasticism”:

1) “The first degree of humility is prompt obedience.”

3) “Be careful to be gentle, lest in removing the rust, you break the whole instrument.”

4) “Run while you have the light of life, lest the darkness of death overtake you.”

5) “Prayer ought to be short and pure, unless it be prolonged by the inspiration of Divine grace.”

7) “One who never stops talking cannot avoid falling into sin.”

8) “We read it is true, that wine is by no means a drink for monastics; but since the monastics of our day cannot be persuaded of this let us at least agree to drink sparingly and not to satiety because ‘wine makes even the wise fall away’ (Eccles. 19:2).”

10) “In the salutation of all guests, whether arriving or departing, let all humility be shown. Let the head be bowed or the whole body prostrated on the ground in adoration of Christ, who indeed is received in their persons.”