Why our little sins mean a lot 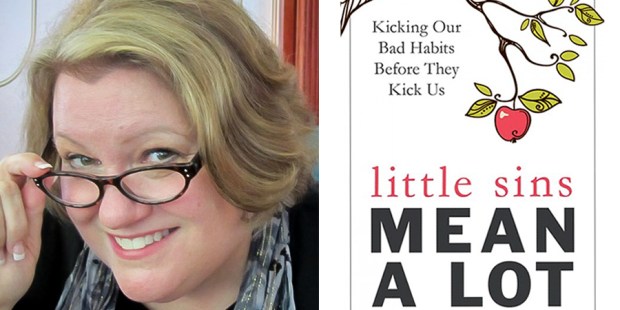 Does that little white lie you told really matter? Is it such a big deal when you procrastinate, don’t take care of yourself, or complain? Elizabeth Scalia says yes, it matters. In her new book Little Sins Mean A Lot, Scalia uses examples from her own life and experiences to demonstrate that our everyday “bad little habits” have a serious impact on our spiritual lives and can get in the way of growing closer to God. Scalia took a few moments from her busy schedule as Aleteia’s editor-in-chief to tell me more about Little Sins.

Zoe Romanowsky: Your book made me realize I’m a far worse person than I thought I was. Maybe I shouldn’t thank you for that, but I really must because I think this book can be used as an Examination of Conscience. Did you write it with this intention?

Elizabeth Scalia: I’m sorry that you feel like you’re “a worse person” than you thought you were. I disagree; I know you are a very good person, just a sinner, like me — like all of us. And seriously, that was not the aim of the book, which I really tried to keep as light and humorous as I could. I used myself as fodder for most of the sin discussion distinctly because I didn’t want anyone to feel “bad” about themselves. Feel bad for me, maybe, or my poor family, but not themselves!

I wrote the book because I was becoming overwhelmed with guilt for not writing it after I said, most reluctantly, that I would. I never liked the idea of writing a book about all of our little sins and bad habits because I knew it would lead to me needing to look at all of mine, and further, me having to listen to people ask — quite fairly — “what were you thinking, writing a book on this topic, when none of us want to look at these things, and besides…look at yourself, woman!” When the publisher sent Little Sins out to a few friends for either review or promotion, I got a fast email from one of them saying, “Well, thanks a lot! I liked my little sins; we were comfortable together; it was so much easier looking at the big sins out there in the world than having to look at myself up close.” I believe there was a liberal use of the word “fie” sprinkled throughout.

Happily, this friend did end up liking the book. But he still sends me a curt beration after he finishes each chapter.

You made yourself very vulnerable in the book, using personal examples and stories to illustrate the bad habits and sins you speak about. Were you different by the time you finished writing it, and if so, how?

Hmm, different. Maybe, perhaps only in how much more aware I am of my own recalcitrance. I can’t deny my sins to anyone anymore, especially not to myself — I can’t kid myself — when I catch myself falling into one of the habitual sins of my life, I no longer can pretend that I am acting unawares. Now, I have to own my stuff, own that I am knowingly doing what I ought not. Sometimes, the awareness is enough to make me pull back, reconsider, and choose differently. At other times, I see that I’m stubbornly, pig-headedly plunging precisely into the mud I allude to on the very first page. Something about a baby elephant wallowing in a puddle.

“Different” also in that, through the daily examen, I get to think it through, and — instead of hating myself as I normally would do — I am grateful for the small victories and expressing a more positive attitude about the battles that will face me the next day. “Different” in that I have made room for mercy in my own life.

How did you come up with the 13 sins you focus on?

I had planned on 12, to be biblical, but I realized that Sins of Omission needed to be in there. And that was a tough chapter to write. But I figured, if I was reluctant to look at “what I have failed to do” and how that has impacted others — and what that habit of not-doing has meant in some serious ways — then others would be too, and as long as I was bringing it all up, I might as well be tidy and thorough. I will be never saint, but perhaps it will get me a little time off in Purgatory!

You write that one way to break the habit of “half-assing” things is to consider everything we’re doing, at any given moment, to be “God’s work.” How do we shift into that kind of mindset?

That might be the insight I most appreciated coming to as I was writing Little Sins. While I take my work very seriously, I can’t always say I’ve been as diligent while cleaning out the fridge or weeding the garden; something always gets undone, or I judge it’s “good enough” and end the project so I can go do something that I really want to do — “my own work,” so to speak. In writing the book it really became clear to me that I have no “own” work; I have only the work God has put before me in a given moment, and so that is “God’s work” and as such, it’s deserving of all of my best efforts. I truly believe that. And it does make a difference to how I approach chores and projects. Although, sadly, my patio plants still died this year because I wasn’t a great waterer.

What’s the difference between a sin and a bad habit?

Teresa of Avila said, “Don’t let your sins turn into bad habits.” In my book I note that and then add: “Don’t let your bad habits turn into sins.” I confess I can’t always easily differentiate between them, but Teresa is a Doctor of the Church, so if she says there’s a difference, I will believe her. Maybe I can answer this way: if Teresa was talking to one of her nuns who had missed Mass once because she just wasn’t in the mood, she might caution, “Sister, don’t let your sin become a bad habit.” In other words, try not to do that again.

On the other hand, if she had a nun who was perhaps a bit of a dreamer, who missed the bells ringing calling her to Mass, she might caution the sister to not let that bad habit of unawareness — of dawdling in a daydream — turn into the sin of putting herself before God, before worship.

It seems to me that we are all guilty of most of the sins you talk about in the book, at least to some degree, but which one(s) do you think people struggle with the most?

I think you’re right, there is nothing new under the sun, and I’m not so unique that my sins are appreciably different from anyone else’s — the procrastination; the gossip; the judgement and suspicion; the sins of omission. The whole discussion of “little” sins latches on to how they root themselves within us and then grow into the deadly sins. When people used to ask me what I thought was the greatest expression of idolatry, that was easy — the zeitgeist and how we all serve it and train our children to serve it, as well. What sins do most of us struggle with? Possibly what I call “Clinging to our narratives beyond their usefulness,” because that tends to spread its tentacles through so many of the deadly sins: wrath, envy, sloth, pride, greed, lust and even gluttony, which is one of those sins that can apply to the thin and the fit as well as to the fat.

How do we make sure that attending to our daily little sins doesn’t lead to us to be overly focused on ourselves and our inadequacies, or overly scrupulous?

Well, scrupulosity is something I certainly warn against in the book, as it comes with its own set of problems. The point of the book is not to make us neurotic about everything we think and do, but to simply become aware that we do them. I think making a daily examen as prescribed by Ignatius is the best tonic against scrupulosity because in going through its steps you find yourself honest before God but also receptive to his mercy. And if God can be merciful to us, and he is, then we can certainly recognize it, realize we are not more than God and therefore give up the need to overdo regret or wallow in it. It really is okay if we lose track of where we are on a rosary. We really don’t have to go back and repray the decade, because intention counts. It’s really okay if we slipped into a habitual little sin today; we’ve seen it, we’ve acknowledged it and tomorrow we get another chance.

More to read: Shame vs Guilt: A guide for the scrupulous