Louis and Zélie Martin “failed” all the way to sainthood 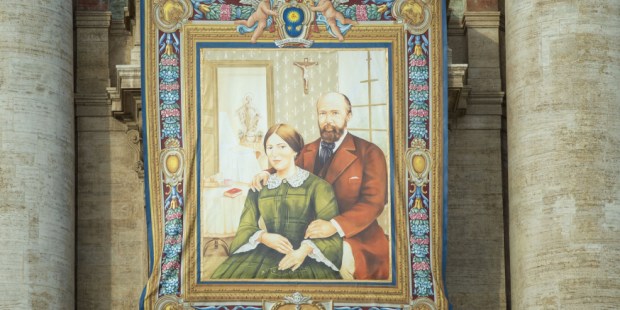 How God uses “failures” for his purposes

All of us experience failure, whether in small ways – like failing a Geometry test in middle school — or in ways serious enough to change our life circumstances. Whatever the details, we all know that sinking feeling that comes with failure.

However, can we truly call any of our disappointments real, absolute failures? Something may look bad in the moment, and the future may seem bleak to us, but what does God think of it? As always, he is in control and knows how to turn a failure into the greatest blessing of a person’s life.

Take for example the lives of Louis and Zélie Martin.

Louis Martin, born into a strong Christian family, decided not to continue his father’s military career and instead pursued the call to the priesthood. At age 20, Louis traveled to the Swiss Alps to enter the Canons Regular of the Hospitaller Congregation of Great Saint Bernard (this is the same religious order famous for the “St. Bernard” dog). After making the long trek up the mountain, Louis was asked by the monks to improve his knowledge of Latin. He tried to learn it, but eventually gave up.

More to read: 3 Saints who probably had learning disabilities

Having been denied entrance to the monastery, Louis descended the mountain and stayed in Rennes and Strasbourg to learn the art of watchmaking. He then returned to Alençon, where he set-up his own shop.

Zélie (born Marie-Azélie Guérin) was also raised in a devout family, and longed to consecrate herself to God in religious life. She sought to gain entrance to the Daughters of Charity at the Alençon hospital, but the Sister Superior discouraged Zélie from entering on account of her poor health. Steadfast in faith, Zélie prayed to God, “My God, since I am not worthy to be Your spouse like my sister, I shall enter the married state to accomplish Your holy will. I beg You, then, let me have many children, and may they all be consecrated to You, my God” (The Mother of the Little Flower).

However, while she had faith enough to see where God was leading her, Zélie was still heartbroken about the denial. She wrote many years later, “for a very long time my mind and my heart were only at the Visitation Monastery… I would have liked to hid my life with [my sister]” (A Call to Deeper Love).

Zélie then devoted herself to lace making, started her own business and was well known for her point d’Alençon lace.

In summary, Louis and Zélie were never even permitted to try religious life because of their deficiencies. They were “failures” in the eyes of many (including themselves) for not being able to dedicate their lives to prayer.

Then, in a moment of pure divine providence, the two “failed” vocations glanced at each other while crossing the Saint-Léonard Bridge. While they held each other’s gaze, Zélie heard a voice from heaven say, “That is he whom I have prepared for you.”

Shortly after the encounter they officially met and grew in love with each other. It did not take much to convince them that God had destined them for a life-long union of love and so three months later they were married.

They exchanged vows in a candlelight ceremony at the stroke of midnight in the medieval Church of Notre Dame d’Alençon on July 13. After entering into the sacrament of holy matrimony together, the two contemplatives still wanted to dedicate their lives to prayer.

In fact, Zélie later wrote that she was ignorant of the “facts of life” and cried at the thought of engaging in marital relations. Louis and Zélie then went into a mutual agreement to live as “brother and sister” in their marriage. Louis was particularly interested in this circumstance, as he wanted to live a married life of contemplative prayer.

However, their confessor eventually intervened and asked that they abandon their virginal agreement for the sake of rearing children. Once again, Louis and Zélie were denied their desire for a life dedicated to silence and prayer.

In the end, it was God’s will that they “failed” at religious life and “failed” in their desire for a virginal marriage. While they never planned on having children or even getting married in the first place, they were graced with numerous blessings. Had they never met, had they remained celibates for life, we wouldn’t have known the wonderful and inspiring Saint Thérèse of Lisieux! If they never failed during life, they would never have reaped the fruits of victory.

Let us remember, we only see a portion of God’s plan for us on earth and what may look like “failures” in our eyes, could be the greatest blessing we ever knew.