How a pope and his archrival became friends… and saints 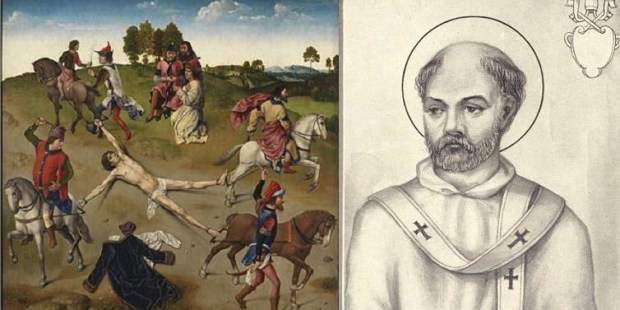 A pope bent on mercy and a Catholic hardliner guarding Justice, living in an era of social decay… wait… this sounds familiar!

In our present political and social climate, where common ground is growing scarce, where divisions run deep and social reconciliation seems impossible, a story that can give people hope is always welcome.

Here is one such story – a true one — about two saints, Pontian and Hippolytus.

It begins in the early 3rd century, when St. Callistus I was pope. Having our grave sins forgiven wasn’t quite as simple as walking into the confessional back then, and there were some Christians living at that time who actually believed that people who admitted to having committed grave sin should never be welcomed back into the Church.

St. Callistus, being a merciful man, was open to reconciliation after penance. Hippolytus, however, a priest and well-respected theologian of the day, was more of a hardliner. Believing that the pope was too much about mercy, and too lax, Hippolytus eventually took the extreme measure of breaking away from the Church and leading his own rival group. Hippolytus, thus, became the Church’s first antipope.

Hippolytus’ schism had been going strong for 13 years before Pontian was elected the 17th successor of St. Peter (after St. Callistus and St. Urban I had died) and he disliked Pontian as much as he had Callistus. Pontian too, was in favor of mercy and reconciliation for those who had committed grave sin but had repented and made a proper penance, and so Hippolytus’ schism continued for all five years of Pontian’s papacy.

In 235, however, the Roman Empire reared its ugly head as a new emperor, Maximinus, took the throne. Maximinus, no fan of Christians, had both Pontian and Hippolytus kidnapped and exiled to the salt mines of Sardinia, a “living death” as many called it back then, thus ending their respective reigns as pope and antipope.

It was in those mines that something remarkable happened, a true work of God’s Providence. At some point before both died of exhaustion, Pontian was able to reconcile his former foe with the Church from which he had been separated for nearly two decades. Because of this, both men are regarded as martyrs, and are in fact celebrated together on August 13, the Feast of Sts. Pontian and Hippolytus.

This story has special significance in many ways. Hippolytus, for one, was perhaps the most prolific writer on theology and Christian doctrine prior to the reign of Constantine. It is in large part thanks to Hippolytus that we know what the Roman liturgy and the Church’s structure looked like. To have had such a man die in opposition to the faith would have been a great tragedy.

But on a more contemporary note, the story of these two saints has special significance for the 21st century. The Catechism of the Catholic Church notes, “It is the unfaithfulness of the members to Christ’s gift which causes divisions,” (821) and it was Jesus himself who, before His Passion, prayed, “that they may all be one.” (John 17:21)

With our world teetering toward widespread chaos, it is imperative that we be able to identify common ground where we find it. As our “ecumenism of blood” gets ever more real with the daily persecution of Christians the world over, we must continue to pray for a conversion of heart for those with whom we are separated, from the lowest levels — our broken family relationships — to the highest, including those working in opposition to life, truth, and freedom, and especially those within the Catholic Church who are divided and barely listening to one another. Particularly regarding the latter, the story of Sts. Pontian and Hippolytus should be especially encouraging – inspiring us to resist the temptation to dismiss each other, which never leads to unity or understanding.

Sts. Pontian and Hippolytus, pray for us!