Aaron Neville speaks to a fragile world in “Apache” 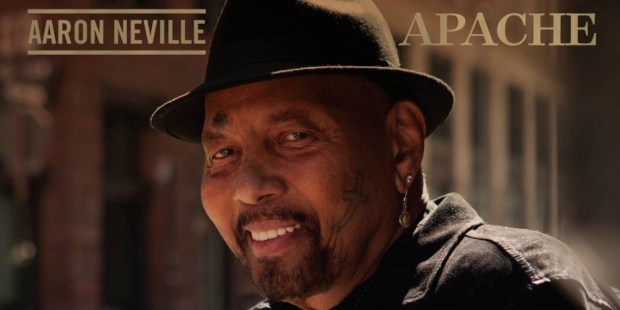 If faith is supposed to be a private matter – a sphere of “worship” limited to pious thoughts and prayers – Aaron Neville, whose brand new album Apache releases today, is a bonafide rule-breaker.

The New Orleans soul legend doesn’t just let his Catholic faith inspire his music – he lives it. Over a decade ago, The New York Times marveled at how Aaron Neville’s storied devotion to Mary and St. Jude (whom Hunter S. Thompson called the “saint of the doomed”) was changing the lives of people around him:

“Because Mr. Neville has publicly credited St. Jude with saving him from heroin addiction, chronic depression and ‘slavery-style contracts,’ he has become a conduit for others in deep despair…

In the last few months he has corresponded with numerous cancer victims. An autistic boy from Nevada was ‘out of tune with the universe,’ as Mr. Neville puts it, until he heard the doo-wop sound of the Neville Brothers.

In Britain many social workers have sent Neville CDs to suicidal patients as spiritual medicine, hoping his voice will quell depression. In India a bridge has been named for him. Doctors at the Betty Ford Clinic, in California, sometimes use his gospel CD ‘Devotion’ to comfort addicts in detox.

In November Sheila Munchin, a fan of Mr. Neville’s with whom he had been conversing daily, died of cancer. ‘My wife was losing her five-year battle with cancer,’ her husband, Bob, recalls from Fairmont, W.Va. ‘We went to see Aaron perform at B.B. King’s club in New York. She had already lost a kidney. They became friends, and every day, I’m not kidding you, he called Sheila and prayed with her over the phone. Just before her death, when she was unable to speak, Aaron read her a prayer.’”

Neville’s example speaks for itself. But it’s his trademark warble – a trembling falsetto Raymond Arroyo called “the voice of a battered angel” and “an ethereal sound with edges roughed by hell” – that most of us are familiar with, if only from watching Fallon. It hasn’t changed much in the 50 years since his first hit single, “Tell It Like It Is,” but Neville’s grace-filled tracks – especially covers of “Ave Maria” (famously used in the credits of the film Alive) and “Amazing Grace” – continue to bring healing to millions.

Yet Apache opens with a kind of urgency and energy not present on some of his more recent gospel efforts. This is a very clear return to the rugged sound of records past, especially with an assist from the horn section of Daptone Records, a label that specializes in throwback funk and soul.

The album opens with a trio of 70s-style love songs about perseverance, fidelity, and devotion: “Be Your Man,” a horn-heavy funk track; “All of the Above,” a slower mediation about what love really means; and “Orchid in the Storm,” a smooth-as-butter ode in the style of Smokey Robinson.

But Apache also confronts the darker realities of life: “Hard to Believe” entertains a voice of doubt in hard times; “Make Your Momma Cry” is a warning to young people running wild in a wild world; and “Ain’t Gonna Judge You” cautions against prejudice of all kinds. “Someone higher than us all is gonna judge us all,” he sings at the song’s close. “I ain’t gonna judge you.”

Neville’s faith emerges most prominently on two tracks: first, “Heaven,” a soulful, tender glimpse of the life of the world to come:

But it’s in the album closer, a raw look at the world as it is, that he really bares his soul. “Fragile World”, which is mostly spoken by Neville in his thick New Orleans accent, looks to figures of the past to face a shadowy future – and finds peace in the light of faith:

“I’d like to know where the love has gone
All over these united divided states
There’s still so much fear, so much hate
Will we ever get it together on this earth?
We’re all sisters and brothers
Like Martin said, we better live together as brothers and sisters
Or die together as fools
Stop filling our hearts with hatred and breaking all the rules
We the higher ups on the animals chain
But sometimes we just don’t use our brain
Most animals kill for food
Man kills in his neighborhood…
I’ll say a prayer before I go to sleep
And ask God for all our souls to keep
A fragile, fragile world
It’s all we got, y’all”

For a fragile America gripped by a cycle of violence and pain and self-destruction, Apache is more than just a timely record. It’s a necessary one.