Ghostbusters 2016: Not the train wreck of the trailers, but… 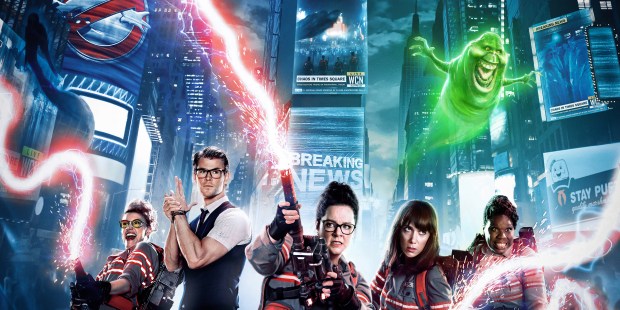 The film delivers a few good laughs, but has some major thuds, including a theological one

The good news is that this movie is hardly the train wreck the advance trailers led everyone to believe it was going to be. Director Paul Feig and his cast work really hard to elicit some honest laughs, and they succeed, if not all of the time, at least enough. This isn’t really surprising, though, considering the comedic pedigree of Feig’s four leading ladies.

Kristen Wiig plays Erin Gilbert, a chronically insecure professor who has abandoned her youthful ghost-believing ways in an effort to secure tenure. Melissa McCarthy plays Abby Yates, the frumpy friend Gilbert left behind who, when she isn’t being frustrated by the lack of noodles in her won ton, is still trying to prove the existence of ghosts. This is Wiig and McCarthy comfortably falling back on reliable personas they’ve played countless times throughout their careers, but hey, if it ain’t broke…

When Abby republishes an embarrassing book on ghosts she and Erin co-authored in their younger days, the panicked Erin rushes to Abby’s lab to try and convince her old colleague to take the tome off the market. There she meets Abby’s new partner, physicist Jillian Holtzmann, played by Saturday Night Live’s Kate McKinnon. Holtzmann is sort of a gender-flipped Doc Brown from Back to The Future, right down to the hairdo and facial tics. Depending on what mood you happen to be in, McKinnon’s performance will either become your favorite part of the movie, or quickly grate on your last nerve.

Abby agrees to Erin’s demands, but only if she first helps research a possible spirit at a local museum. When the somewhat disastrous results of that investigation end up on social media, it draws the attention of subway worker Patty Tolan, who happens to be having some trouble with an unfriendly ghost in one of the train tunnels. Patty is portrayed by another SNL regular, Leslie Jones, who has spent years on the show perfecting her “don’t mess with me” demeanor. You might remember her as Adam Driver’s muffin-deprived manager in SNL’s recent Force Awakens parody. While the confrontation with the subway ghost also ends rather badly, the experience is enough to convince Patty that she might like to join the rest of the ladies in what the press has dubbed the Ghostbusters.

Now, much prerelease ado has been made over the fact that the four leads are female, but the film itself rarely makes an issue of it. The closest it comes to feminist preachiness is when the antagonist bemoans that he is trying to jump start a ghost apocalypse because he feels marginalized, only to have the Ghostbusters roll their eyes and claim that’s what it’s like being a woman every day. The line doesn’t elicit a laugh and the film quickly moves on. Then there is the running gag that the Ghostbusters’ male office assistant, played by Chris Hemsworth, is an utter moron who is only kept around so the girls can ogle his Adonis-like looks. It’s a one-note role reversal joke, but Hemsworth is so freakishly likable that it never really overstays its welcome. For the most part, the film steers clear of gender politics and just tries to be funny.

The bad news is that despite all the effort to deliver a good film, this is still an attempt to remake Ghostbusters, one of those rare movies whose particular magic brew of the right people and the right script coming together at the right moment simply cannot be duplicated, no matter how many references or cameos from original cast members the new film tries to squeeze in. As mentioned, not all of the humor works, and when it falls flat, it does so with a resounding thud. Worse, there are no equivalents to the quiet scenes in the original, such as the one in which Dan Aykroyd and Ernie Hudson discuss their individual takes on Jesus. Such moments brought humanity to the characters amidst all the special effects. That kind of scene is missing this time around and the characters suffer for it. Finally, there’s the problem that while the original was all about containing the ghosts, some of the spirits appear to actually be destroyed this time around. That little theological impossibility might not bother the casual viewer, but for someone who pays attention to such things, it’s just one more sour note to contend with.

Still, Feig and his crew have to be given some credit for doing more than just showing up for a paycheck. The new Ghostbusters is about as unnecessary a remake as there can be, but it’s a mostly harmless one that delivers a few laughs if nothing else. In that way, it’s actually more like Ghostbusters 2 than Ghostbusters. I sure hope the ladies don’t mind that they got second best.